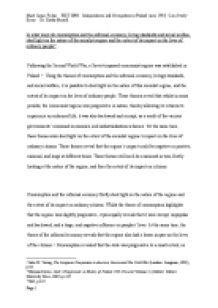 In what ways do the themes of consumption and the informal economy, living standards and social welfare shed light on the nature of the socialist regime in Poland and the extent of its impact on the lives of ordinary people?

They had these concrete blocks they lived in, and they had an outside toilet, and I mean the state of the premises was terrible. I have never seen anything so bad in all my life.[45] Krystyna?s testimony revealed the backward nature of the communist regime when she described her cousin?s apartment. [46]The fact her cousin?s apartment had a toilet outside the house rather than inside it, and was generally in poor condition is important, since it demonstrated the communist regime?s failure to modernise society. By failing to modernise society, the communist regime lost its appeal amongst the population, whom were expecting to live in a good way. Furthermore, housing shortages also had a large, detrimental impact on the regime?s citizens, as this resulted in overcrowding and pollution. [47]Overcrowding was seen by the way in the majority of cases, three people lived in a room.[48] It was important that in many houses, a room was pre-occupied by up to 3 people because it demonstrated most citizens suffered extensively during the regime, and that they faced economic hardships every single day.[49] Housing also revealed the regime was corrupt due to the fact housing construction was often prioritised for some people over others, which therefore spread inequality amongst the population.[50] George Kolankiewicz and Paul G. Lewis further support this as they argue that ?the social distribution of housing can therefore be quite indicative of inequality within the area of collective consumption.?[51] Kolankiewicz and Lewis make a strong argument because the majority of housing facilities were provided for government ministers and factory directors, rather than the working-classes, whom the communist party was supposed to represent. Whilst 58% of housing was occupied by local government officials and factory directors, only 54% of housing was given to the working classes.[52] The fact a higher percentage of housing was given to government officials than working classes was important in revealing the regime was corrupt, as it demonstrated that the communist system based its social welfare policies around the nomenklatura system, whereby ...read more.