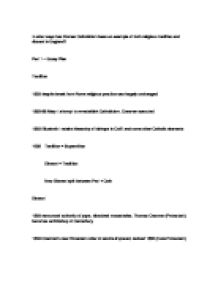 In what ways has Roman Catholicism been an example of both religious tradition and dissent in England?

This radical reversal of all of the dissenting policies led to the abolition of Cranmer's prayer book and order of service, and the summary execution of Cranmer himself, while many of the other leaders of the Protestant movement went into exile. Whilst the Roman Catholic Church's revival in England was accepted by the many of the population the country was still divided, the revival was however short lived as Mary I was only on the throne for 5 years before her death and succession by the Protestant Queen Elizabeth I. It was under Elizabeth I that the Church of England began to find some stability and a balance between the tradition and dissent. That is not to say however that Elizabeth I was not a strong Protestant, but she was also a strong politician and recognised that the church was still very much divided between the traditional ways and the Protestant's dissenting ways, it fell to her then to try and strike an amicable balance between the two views. Using religion as a tool to unite her subjects, Elizabeth I began to reintroduce the Protestant ideals but not as strongly as many would have liked. The Protestant Book of Common Prayer was re-introduced and its use enforced by the act of uniformity in 1559, whilst documents like these and the Thirty-Nine Articles of 1563 were heavily Protestant, they also included certain Catholic principles, the hierarchy of bishops for instance. ...read more.

This demonstrates the existence of another dissenting force, the hard line Protestants. With the return of the monarchy in 1660 with the rise of King Charles II the church returned to the new traditional way, bishops were reinstated, a new prayer book published and all dissenting clergymen removed from office. Many of the new religions were however outlawed and persecuted as they were seen as Dissenters. The church continued in a state of flux from then until 1688 when Mary II took the throne and the Protestant Church of England was reaffirmed, the conflicts in the church from this point onwards were greatly reduced. In conclusion I believe that at the start of the 16th Century, Roman Catholicism in England was an example of tradition, it had been the main religious factor in English life for approximately 1000 years, from 1533 onwards however the dissenting force of Protestantism gained power and support. During the 17th Century however the Protestant Church of England was seen as being traditional and was the most accepted religion in England, it was at this point then that Roman Catholicism began to be an example of dissent. I therefore conclude that Roman Catholicism has displayed both tradition and dissent in relation to the religious views of the Church of England. ...read more.