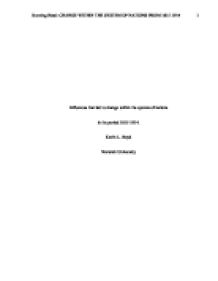 Influences that led to change within the system of nations in the period 1815-1914.

Influences that led to change within the system of nations in the period 1815-1914. Kevin L. Boyd Norwich University Abstract The world faced drastic changes during the period of 1815-1914 with many nations entering the industrial revolution, fighting the first modern wars, and revolutionized agricultural practices taking hold. The period that I am looking at in this paper began with the Congress of Vienna from September of 1814 until June of 1815, where the nations allied against France dictated their terms and in doing so changed the way diplomacy was conducted. This period saw the era of Pax Britannica, which was the expansion of the British Empire into all corners of the globe. Several modern European nation-states unified into the modern nations of Germany, Italy, and Austro-Hungary. Democratization took hold in most continental European nations, and vast majorities of the population began to migrate to cities leading to nation-states becoming more urbanized. The United States of America fought a terrible civil war that affected Europe both in trade and in ideals. And finally this period ends with the clouds of war gathering over Europe for a conflict unlike any the world has ever seen before. I will look at the resulting changes, whether they could have been sustained, and the consequences of the changes. Keywords: Industrial Revolution, Congress of Vienna, diplomacy, democratization Influences that led to change within the system of nations in the period 1815-1914. ...read more.

674). The only regional power that did not participate in the Congresses of Europe was the Ottoman Empire most likely because they were seen as outsiders and they were not necessarily excluded but chose not to participate. I believe that this has a lasting effect to this day as the modern nation of Turkey that has resulted from the fall of the Ottoman Empire is still struggling to get included into European politics and the European Union (Migdalovitz, 2010, p. 26). However the British Empire, which was also outside of continental Europe did participate and in fact utilized the congresses to further their own interests with Pax Britannica. The term Pax Britannica is Latin for "The British Peace" and is used to define the timeframe that we are studying (1815-1914) which was a period of relative peace in Europe, the term 'relative' being key here. Britain controlled most of the key maritime trade routes and was the ruler of the seas without any significant naval challenger during this time. The term also applies to the spread of British imperialism after Napoleon's defeat in the Battle of Waterloo (Pugh, 1999, p. 83). While there was no major outbreak of hostilities for Britain until the Crimean War in 1854, there were several conflicts notably in Canada in 1837 during the Patriot War Rebellion (Greer, 1996), 1838 saw the beginning of the First Afghan War (Waller, 1993) ...read more.

Conclusion The foreign policy of the many states in the world from the period between 1815 and 1914, resulted in Pax Britannica for Britain but not necessarily for the remainder of the world. While continental Europe was constantly beset by wars and revolutions, and the US fought a devastating civil war, most of the world was colonized by the western European nations or fought to get out from under a colonial yoke during this time. The policy of colonizing anyone and everyone was a failure in diplomacy, and actually of humanity or common decency, and if this policy remained today we would continue to see wide-spread revolution. While the world had its' bloodiest century in the 20th century, I believe that it would have been much bloodier had we still had the same worldview that led nations to colonize. Colonization was a world-view that developed due to racism, social-darwinism, and a lack of diplomacy. The diplomacy during this period was instituted to keep monarchies in power, and nationalism as well as the common people down, and therefore was doomed to fail. People became more educated as a result of the industrial revolution, and therefore more aware of who they were and their place in the world. They wanted more for themselves, and a greater say in their governance. Therefore diplomacy as did the rest of the world changed at a rapid pace during the 19th and 20th centuries. ...read more.