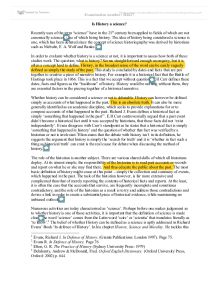 Is History a Science

Examination number: HJ427 Is History a science? Recently uses of the term "science" have in the 21st century been applied to fields of which are not canonically sciences. One of which being history. The idea of history being considered a science is one, which has been debated since the concept of science historiography was derived by historians such as Niebuhr, F. A. Wolf and Ranke. In order to evaluate whether history is a science or not, it is important to assess how both of these studies work. The question, what is history? Seems straightforward enough an enquiry, but it is often a concept hard to define. History, in the broadest sense of the word can be easily vaguely defined as simply the study of the past. This study is concluded by dates and facts that are put together to creative a piece of narrative history. For example it is a historical fact that the Battle of Hastings took place in 1066. This is a fact that we accept without question. E.H Carr defines these dates, facts and figures as the "backbone" of history. History would be nothing without them, they are essential factors in the piecing together of a historical narrative. Whether history can be considered a science or not is debatable. History can however be defined simply as accounts of what happened in the past. This is an absolute truth. It can also be more generally identified as an academic discipline, which seeks to provide explanations for or to compose accounts of what happened in the past. Richard J. Evans defines a historical fact as simply 'something that happened in the past'1. E.H Carr controversially argued that a past event didn't become a historical fact until it was accepted by historians, that these facts did not 'exist independently'. Evans disagrees with Carr's standpoint as he states that a historical fact is simply 'something that happened in history' and the question of whether that fact was verified by a historian or not is ...read more.

Toynbee's book covers 'twenty-one human civilisations and six thousand years of human history, drawing from them a series of general laws according to which civilisations rose, developed and collapsed'. Toynbee's laws that were considered 'an immortal masterpiece' posited examples of four methods, which showed great men in history save civilisation in danger of collapse. He illustrated theses stages in a table. 13 However even this was disputed, particularly by Pieter Geyl, a modern historiography writer who was sceptical of Toynbee's findings. Geyl stimulated that Toynbee minimally selected the evidence he wanted. This idea postulated by Geyl highlights the issue of the historians, and his or her ability to maintain an attitude of objectivity when writing. Some believe that that impartiality and the idea of historical truth is impossible in history, others suggest otherwise. When we consider the scientists and his or her role, it is clear that it has hard for subjectivity to invade a scientist's work. In science there is no room for personal opinion. The historian was often considered as one, which gathered the facts and presented publicly. Marcus Tullius Cicero laid down this ideal of absolute impartiality in the 1 BC when he stated that: "the first law for the historian is that he shall never dare utter untruth. The second is that he shall suppress nothing that is true. Moreover, there shall be no suspicion of partiality in his writing, or of malice." Richard Evans agrees with this idea as he states that in order for a historian to carry out their role successfully they need to 'shed all prejudices and preconceptions and approach the documents with a completely open mind'14. However it is fair to suggest that such neutrality is impossible for a number of reasons. To begin with, we need to address the fact that it is an absolute truth that history is based on the selection of facts. ...read more.

that History, like science relies on 'philosophical assumptions and concepts'. Historians often adopt psychologism as an attempt to identify the causes or to understand historical events through psychology. For instance, some historians have attempted to explain the holocaust by arguing that it is linked to the close relationship Hitler shared with his mother, and furthermore the fact that her sudden death was revealed to him by a Jewish doctor. This is an example of historians using science to explain or understand history. However is this evidence sufficient enough to define history as a science? Perhaps not. Nevertheless, the answer to argument of whether history is science is simply no. Just because there are a few similarities between the two, it doesn't mean to suggest that history is automatically a science. The fact that a football and apple are both round doesn't mean that a football can then be called a fruit. Yes, both of theses studies are an aspect of knowledge, of which the word science translates to. Both scientists and historians deal with evidence and try to arrive at casual features and outcomes; however there are too many differences between the two studies to suggest that history is a science. The historian's key role isn't simply to report the facts on what happened in past. The historian has to approach history in an analytic fashion. Historians aren't just concerned with the 'where' and the 'what', but also the 'why'. The historian's quest for the 'why' often provides the basis of judgement and subjectivity in their writings. This indicates the vital difference between history and science. History tries to remain objective, however often fails. Science often remains true to the promise to be impartial, as the scientist's role is to provide truth. Similarly the idea that Science is a study built on laws, and has the ability to predict future outcomes and history cannot is too big a difference to overlook. ...read more.

This essay puts forwards a number of good ideas and makes a good attempt to answer the question. The student could improve it by being more analytical about the nature of science, and by looking at differences between scientific disciplines. The essay structure could also be improved, especially towards the end of the essay.