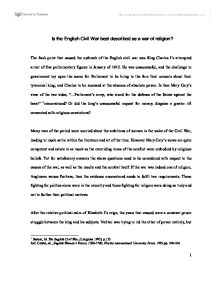 Is the English Civil War best described as a war of religion?

Is the English Civil War best described as a war of religion? The flash point that caused the outbreak of the English civil war was King Charles I's attempted arrest of five parliamentary figures in January of 1642. He was unsuccessful, and the challenge to government lay open the scene for Parliament to be bring to the fore their concern about their tyrannical king, and Charles to be incensed at the absence of absolute power. Is then Mary Cary's view of the two sides, "...Parliament's army, who stood for the defence of the Saints against the beast" 1misconstrued? Or did the king's unsuccessful request for money, disguise a greater rift connected with religious convictions? Many men of the period were worried about the ambitions of women in the wake of the Civil War, leading to much satire within the literature and art of the time. However Mary Cary's views are quite competent and astute in as much as the overriding tones of the conflict were embodied by religious beliefs. Yet for satisfactory answers the above questions need to be considered with respect to the causes of the war, as well as the results and the combat itself. If the war was indeed one of religion, Anglicans versus Puritans, then the evidence encountered needs to fulfil two requirements. Those fighting for politics alone were in the minority and those fighting for religion were doing so truly and not to further their political motives. ...read more.

It is not entirely clear whether the many moderates who at this time moved over to Charles at this point, did so because they found the desired church reforms to extreme or were simply uncomfortable with the challenge to such a great institution as the monarchy. It is my belief however that although some would have been uncomfortable with the religious changes suggested, most would have personified the seventeenth century conservative nature and required simple monotony rather than radical change. The evidence for this can be seen in depictions of the King's eventual execution, where onlookers seem to display shock and horror, not mirth and satisfaction.3 To which side one belonged during the war, was not a cut and dry affair, social class did not always allude to a specific religious or political persuasion. Politics was important however, and it can be said that most of the peerage and greater gentry, allegiance to the king could be found because he was the most likely to restore social order. Below this order, it is believed that many were swayed by the promise that parliamentary victory provided, less hierarchical leadership, which would provide for greater opportunity within the kingdom. Some people fought not for cause but for Crownes, not concerned with the political or religious ramifications, whilst others were forced to fight by either their landlords or Parish councils. ...read more.

His dreams were to no avail, as by 1660 the Puritan experiment was beginning to rankle the English and Charles II begun the restoration of England and the Monarchy. The downfall was characterised by the Putney debates, where Colonel Rain borough representing the commoners argued that every man who contracts with a civil government ought to have a voice in that government. Cromwell was a for the people, but not by the people man and the Rump Parliament until 1653 then Cromwell himself until 1658 did not meet the expectations of the nation. The idea of free citizens championed by the Levellers was just one of the cases for abolishment of the new regime. For the people who fought for their religious freedom during the war, after the war, they fought for their civil liberties, a political affair. The English Civil War is best described as a war of religion. This is not so because it was a battle fought entirely over religion, where men took up arms in the name of God, such as in the Crusades. However to sum up the war, religion is the best term because it is most understandable and the most relevant. Although it is the best description, it is my assertion that for King Charles I the war was not one of religion, he saw himself as simply fulfilling his political role, whilst the Parliamentarians mostly fought for the cause of religion. The English Civil war was a war of religion fought sometimes knowingly, sometimes unknowingly by people attempting to achieve political aims. ...read more.