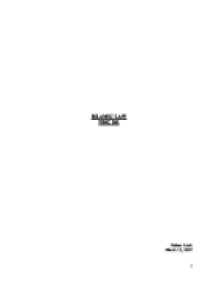 Islamic Law. These four schools are known as Hanafi, Maliki, Shafii and Hanbali and a closer look at them is essential to fully comprehend the Sunni faith. Finally, Ijma or the consensus of the community is very important to further

ISLAMIC LAW NMC 201 Rabea Amin March 13, 2007 Islamic Law In order for our society to work efficiently and ensure that there's structure we need a set of rules to make certain that there's peace and harmony and that everything works accordingly. As if there were no rules or regulations our society would just disintegrate and everything would be in chaos. This is because our mind frames are so vulnerable to turmoil that we humans seek any opportunity to cause mischief, but with rules most of us remain in our boundaries and try to do our best. Religion is not much different from this as for a religion to survive and flourish the followers need a set of rules that guide them in matters. Therefore, to convey these ideas to the followers most religions have scriptures that guide humans and teach them how to live their life efficiently. Amongst these religions is Islam. Islam is one of the monotheistic religions which has a large number of followers around the world. This religion was revealed to the Arabs by the messenger Prophet Muhammad which Muslims believe to be the last Prophet. Prophet Muhammad set the foundations for Islam and was highly regarded by all. After the death of the Prophet, there was a lot of dispute amongst the Muslims regarding the matter of succeeding the Prophet and leading the Ummah. Eventually Abu Bakr became the first caliph but there were some people who opposed this as they believed Ali to be the rightful successor and thus the community was divided into two groups. Thus the Sunnis and Shi'is surfaced as two adversaries of Islam. The Sunni community is the largest one and is followed by approximately 80% of the Muslims1. This "heterogeneous" existence of the Muslim world lays the foundation for the different Law Schools. Initially, instead of a real Islamic law school a type of legal thought known as madhhab had surfaced to deal with legal matters in which the rulers passed out judgments to resolve legal issues2. ...read more.

These works are very important and are still used by the followers in all matter of religious importance. Over the years this school of thought has spread through North Africa and Spain and serves as the dominant religious source for Muslims in African countries and also shares heavy influence in Egypt with Shafi'ism. Another important school of Islamic fiqh (jurisprudence) is known as the Shafi School which was founded by Imam Abu Abdullah ash-Shafi'i who was a descendant of the Prophets uncle Abu Talib. Imam Shafi obtained a lot of knowledge from a young age and was a famous scholar of his time. He was very much experienced in legal matters and had a lot of knowledge in Islamic jurisprudence. He acquired his knowledge in Medina and was a student of both Imam Hanafi and Maliki. Imam Shafi's school of thought assumes an intermediary position between the moderate Hanafi and the conventional school of Maliki. The intermediary position is due to his knowledge of both Hanafi and Maliki ideas and thus Imam Shafi'is ideas converge between the Sunnah and importance of the community when dealing with matters of legal importance. Nevertheless, the Imam placed the ultimate authority in the teachings of the Prophet Muhammad and made it overrule the rest. The school places a lot of importance on customs, reasoning and consent of the community and is noted for its conciliatory position in judgment and consideration of views. Further, Imam Shafi is credited with writing the famous book Al-Risalah which is considered the groundwork of Islamic jurisprudence10. The book gained a lot of importance as it was written in the time when Prophet's Hadiths were being gathered and there was a lot of disagreement amongst the scholars, however with the emergence of this book a lot of matters were resolved. The main differentiating quality of this school is that it places a lot of importance on the Quran and the Sunnah and gives less authority to ijma and ijtihad (thought of scholars) ...read more.

An example is the idea of Prophet Muhammad being infallible and sinless which is very common amongst Muslims eventhough no hints of it are present in the Quran. In fact, Quran depicts the Prophet as a simple man without any of the above qualities. The concept of ijma is only central to Sunni Islam and is not common amongst the Shi'is. Ijma was also used in authentication of Hadiths at the time when Hadiths were being compiled. Finally, many scholars argue upon the matter of who should esstablish ijma and whose ijma is valid. Some scholars say that only the Sahabas can establish ijma due their close connection with the Prophet and that they were the ones that compiled the Quran and ensures its authenticity. Islamic ullemas say that eventhough individua Sahambas many not be "infallible" but they as a whole cant agree on error and will always make a sound decision that is in agreement with Islam. In conclusion, religion and law go hand in hand as one compliments the other. Religion is very important for the sanity of mankind but in order to ensure that it remains there and is not disturbed there is a need for rules which are implemented through the law. In Islam these laws are implemented through the Shari'a which relies heavily on the Quran, Sunnah, ijma and qiyas. Different people have different views based on the school of thought that they follow which includes the School of Hanafi, Maliki, Shafi'i and Hanbali. All these schools of fiqh or jurisprudence are adopted by Sunni Muslims and are continuously used for assistance in matters of legal importance. These schools have different approaches to deal with legal matters and some are regarded to be more liberal such as Hanafi while others are thought to be conservative (Hanbali). Nonetheless, one thing which ties them all together is that all four schools have the unifying concepts of Quran, Sunnah, ijma and qiyas which they use to deal with all legal matters. ...read more.