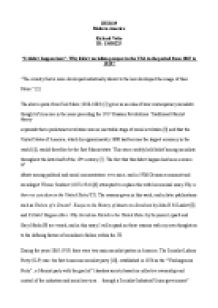 It didnt happen here. Why didnt socialism prosper in the USA in the period from 1865 to 1919?

﻿1HIS419 Modern America Richard Voke ID: 13658225 ?It didn?t happen here?. Why didn?t socialism prosper in the USA in the period from 1865 to 1919? ?The country that is more developed industrially shows to the less developed the image of their future.? [1] The above quote from Karl Marx (1818-1883) [2] gives us an idea of how contemporary socialists thought of America in the years preceding the 1917 Russian Revolutions. Traditional Marxist theory expounds that a proletariat revolution was an inevitable stage of social evolution [3] and that the United States of America, which by approximately 1880 had become the largest economy in the world [4], would therefore be the first Marxist state. This was a widely held belief among socialists throughout the latter half of the 19th century [5]. The fact that this didn't happen has been a source of debate among political and social commentators ever since, and in 1906 German economist and sociologist Werner Sombart (1853-1941)[6] attempted to explain this with his seminal essay Why is there no socialism in the United States?[7]. The reasons given in this work, and in later publications such as Failure of a Dream?: Essays in the History of American Socialism by John H M Laslett [8] and It Didn't Happen Here: Why Socialism Failed in the United States by Seymour Lipsett and Gary Marks [9] are varied, and in this essay I will expand on these reasons with my own thoughts as to the defining factors of socialism's failure within the US. During the years 1865-1919, there were two main socialist parties in America. ...read more.

In terms of labour organisation, Americans embraced pluralist democracy through the widespread uptake of 'craft unionism' [40] in America from the 1830's onwards. These small unions, such as the ?International Molders Union of America (1859) and The Tailors Union of America (1883), often based upon a single vocation or a small sector of industry (similar to craftsmen's Guilds in Europe) were a direct opponent to traditional socialist trade unionism and again highlight the individualism inherent in American political culture [41]. Many American workers felt that they were better of in skill specific representative groups which used collective bargaining as a tool for its own members, than in a general union. The largest and arguably the most influential union in America up until 1935 was the American Federation of Labour (AF of L), founded in 1881 [42] by craft unions disaffected with the autocratic leadership of the Knights of Labour (K of L) (1869) [43], who were open to all workers, including black and female workers. The AF of L only represented skilled workers who were in a better position to bargain than unskilled workers and consisted of smaller affiliated unions who remained autonomous within their respective associations [44]. The AF of L were not Marxist or revolutionary socialist, being more interested in gaining labour's fair share of profits within the capitalist system, and recognised reconciliation as a means to achieve this aims [45]. The Knights of Labour (1869-1949) had a large Catholic base [46] and openly rejected Marxist socialism. Even the National Labour Union (NLU), founded in 1865 as the first nationwide labour federation favoured arbitration over militant strike action [47]. ...read more.

In the 1912 Presidential election in which Eugene Debs achieved 6% of the vote, the Progressive Party(1912) candidate Theodore Roosevelt (1858-1919) gained 27% and the Democrat Party nominee Woodrow Wilson(1856-1924), running on a progressive ticket, was elected the 29th President of the United States with 41.8% of the vote[70]. The 8 hour day in heavy industry, maximum 10hour day for women and children and better pay and conditions were socialist goals achieved more through reconciliation and political pressure from progressive groups as opposed to militant strike action from socialist unions. Crucially, progressive movements were able to encompass a broad range of support from different groups, for example the Sherman Anti-Trust Act (1890)[71] was supported both by the AF of L and the Farmers Alliance [72]. The National Child Labour committee (1904) and the Pure Food and Drug Act (1906), as well as compensation for industrial accidents being (partly) introduced from 1908 were progressive initiatives that undercut socialist ideals ? if capitalist economic growth could be regulated enough to allow all members of society to benefit, why risk socialism with all its possible downfalls. Andrew Carnegie (1835-1919) put it as ?better this great irregularity than universal squalor? [73] In conclusion, socialism failed to prosper in the USA between 1865-1919 through a combination of three major factors. Firstly, the ethnic, racial and religious diversity of the American workforce prohibited a single class consciousness. Secondly, the opportunities and rewards available in America under a capitalist system were too strong for socialist rhetoric to overcome. Lastly, the Progressive movement encompassed many of the reformist ideas of socialism but without the rigid, all encompassing ideology or the 'un-American' revolutionary sentiment, making progressive groups more attractive to voters, many of whom would otherwise have been potential socialist supporters. ...read more.