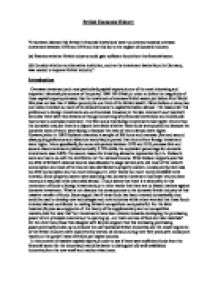 'It has been claimed that Britains financial institutions were too oriented towards overseas investment between 1870 and 1914 and that this led to the neglect of domestic industry. Discuss

British Economic History ''It has been claimed that Britain's financial institutions were too oriented towards overseas investment between 1870 and 1914 and that this led to the neglect of domestic industry. (a) Examine whether British industry could gain sufficient funds from the financial sector. (b) Consider whether an alternative institution, such as the investment banks found in Germany, was needed to improve British industry.'' Introduction Overseas investment,and most particularly,capital exports,is one of the most interesting and important historical phenomena of the period 1860-1914.Paish,in order to define the magnitude of these capital exports,estimated that the total stock of overseas British assets just before First World War,was not less than 4 billion pounds,the one third of the British wealth. Never before or since,has one nation invested so much of its national income to capital formation abroad. The reasons for this preference to foreign investments are controversial. However,in the late nineteenth and twentieth centuries there were two streams of though concerning why financial institutions and individuals had turned to overseas investment. The first one,is that foreign investments had higher returns than the domestic ones,but there is a dispute here about whether these funds were pushed out because the domestic rates of return were fading or because the rates of return abroad were higher. ...read more.

After 1880 more industrial firms converted to public companies,and this gave them more security and raised their extra capital as a way to get more financed into industry. However,as Mathias has pointed out,almost 60% of the capital that goes into industries during this period is actually used to buy the shares of the original owners. Original owners get their financial <<compensation>> for selling their original shares,in order to to buy a landed estate and retire to a new life of leisure and so the investment does not go to new industries but to the already existing ones. By 1885 only 5-10% of major industrial firms converted to limited liability and by 1913 the share of industrial firms on the Stock Exchange of London was 8%,which was a tiny proportion of the Stock Exchange business. Furthermore,the most of these shares belonged to the old established industries such as cotton,iron and steel manufacturers and this is another evidence that there was not much investment going to new industries like cars,chemicals and electrical engineering. In general,the London's Stock Exchange as an alternative way of providing industries with funds,had a little involvement in financing the domestic industry. Only 10% of the needs of the domestic industry was found on the London's Stock Exchange and this 10% was equal with the 3% of what was sent abroad annually. ...read more.

It seems that investment banks were keen on investing in such countries,like Germany and USA,where the monopolies were powerful and the returns of an investment were super-normal. On the other hand,Britain was unattractive to investment banks. The firms were really small,really competitive and in the same time not protected by the competition from abroad. Investment banks tried to set up branches in Britain in the early 1860s and 1870s but they were unsuccessful. It seems that firms did not want the type of financial arrangement that they were offering and that they did not accept the idea of the sole lender with the high charges and interest rates. As Edelstein mentions,there was no demand for investment banks in the UK and albeit being a gap between financial institutions and small,medium sized industries in Britain,it is not clear that investment banks could fill that gap. Conclusion A massive export of capital takes place during the Victorian period. However,old established firms had not higher demand than what the financial sector was offering. When they had extra investment needs,they were filling the gap by their retained profits or by borrowing from friends and local networks. In some extend,the same applies for the new medium-sized industries,which nonetheless faced difficulties in getting financed from the Stock Exchange. However,it seems that investment banks would not be the most appropriate solution for this. ...read more.