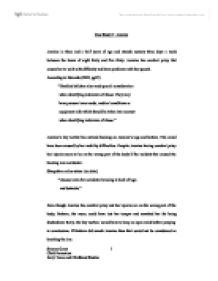 Jasmine's key worker has noticed bruising on Jasmine's legs and bottom. This could have been caused by her mobility difficulties. Despite Jasmine having cerebral palsy her injuries seem to be on the wrong part of the body

Case Study 1: Jasmine Jasmine is three and a half years of age and attends nursery three days a week between the hours of eight thirty and five thirty. Jasmine has cerebral palsy that causes her to walk with difficulty and have problems with her speech. According to Edwards (2002, pg22): "Disabled children also need special consideration when identifying indicators of abuse. They may have personal care needs, medical conditions or equipment aids which should be taken into account when identifying indicators of abuse." Jasmine's key worker has noticed bruising on Jasmine's legs and bottom. This could have been caused by her mobility difficulties. Despite Jasmine having cerebral palsy her injuries seem to be on the wrong part of the body if the incident that caused the bruising was accidental. Shropshire online states: (no date) "Unusual sites for accidental bruising is back of legs and buttocks." Even though Jasmine has cerebral palsy and her injuries are on the wrong part of the body, Barbara, the mum, could have lost her temper and smacked her for being disobedient. Kelly, the key worker, would have to keep an open mind before jumping to conclusions. If Barbara did smack Jasmine then that would not be considered as breaking the law. Edward states (2002, p.10): "It is not illegal in the UK for parents to smack their children because the law allows them to administer 'reasonable chastisement'." ...read more.

These are: 'Common law duty of confidence' - confidentiality can be breached in public interest what is passed on governed by 'proportionality.', 'Data Protection Act1998' - This law covers handling of personal data. Confidentiality can be breached under particular circumstances, for example, child protection and 'Human Rights Act 1998.' This law includes rights to privacy, No interference without concern and justifiable reasons to share information. Case Study 2: James Adults tend to sexually abuse children to meet their own sexual needs. It has been reported that James was abused by his father prior to moving to a new area. James and his mother had to flee James dad because of reported incidents of domestic violence. Since moving to the area James has started a new school where he is failing to concentrate in class and isolating himself from teachers and classmates. Parents have reported to teachers that James has touched girl's pants and exposed himself to girls in the playground. Most of the time it is the child's behaviour that causes concern, sometimes physical signs can be visible. James exposing himself and touching girls pants could come across as a normal thing to because of what is said to of happened with his dad, or it could be the fact that he is curious about parts of the body on himself and the opposite sex. Wickham and West (2002, p.106) ...read more.

If he starts to undress them and show signs that abuse did occur then the worker will take time out with him to express what needs to be expressed, but with safety and propriety. By working with the play therapist, James will not be made to feel ashamed, naughty or puzzled like he could of done with his dad. The play therapist would have to be very careful when talking or asking James questions. To be on the safe side they would avoid asking leading questions. According to West (1994, p.104) the play therapist would use language like: " 'We need to learn to keep our bodies safe', 'In the playroom we don't touch others private parts' (or whatever words James might be familiar with); 'Our body is our own and it's OK to say NO.'" If the play worker was having troubles in communicating with James then she could provide either creative equipment or plastic materials such as sand and water for him to be able to express what it is he is feeling. Another professional who may help James alleviate his psychological and emotional experience is a councillor. The Councillor would be trained to be able to sit and listen to any concerns James or his mum could have. James can also receive help and guidance from other professionals such as: Health Visitors, Psychotherapists, Specialist Social workers, specialist nurse, speech and language therapist and education and behaviour difficulties team. These professionals are all trained to work with children and parents who suffer from psychological effects. ...read more.