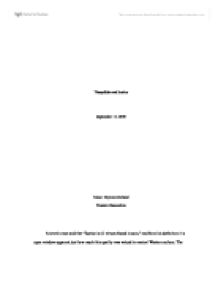 Thucydides and Justice September 15, 2009 Name: DayLan Carlsted Western Humanities Aristotle once said that "Justice is all virtues found in sum," and from his definition it is open window apparent just how much this quality was valued in ancient Western culture. The foundations of Athens were based on justice, and when someone betrayed or resisted justice they were punished. Such as when Mytilene deemed it necessary to rebel against the Athenian Empire. Justice was instituted to serve a two-fold purpose: to set an example and teach the people of Athens the virtue of loyalty. If justice was not present in ancient Greece, anarchy would have ruled the lands, and the great democracy created would have been in shambles. Laws were created to validate justice, and control a vast empire. Woodruffs characteristics are apparent in Greek culture, but are mainly tied to justice and law. ...read more.

As my favorite teacher in high school once said, "To be loved and not feared will lead to your own demise, but to be hated and feared will make you unstoppable." This ties directly into the Mytilene dialogue, because the main issue is whether or not to be the tyrant, and destroy the city, or leave them alone. Peace. Can it be the answer? Mahatma Gandhi based his whole life on this belief, saying that, "I object to violence because when it appears to do good, the good is only temporary; the evil it does is permanent." Violence leaves a permanent shadow of evil on those affected by it. In the Melian dialogue the final outcome was the death and slavery of all citizens, even though it was not in the Athenians best interest to destroy the city. Tyranny was not the first choice, and a peaceful solution was offered far before action was taken, but neither side could reach an accord. ...read more.

Woodruff believes "That punishment be meted out as retribution, proportional to the offense, and only to the guilty." However, without a system of laws, and leaders to enact them, who will carry out punishments, and establish who are guilty? This is why these factors are crucial for creating lasting justice. Laws, peace, and violence are the basis of justice. Depending on one's viewpoint, justice can be many different things. From the Athenians' perspective, peace is established through violence, and peace is recognized through authority and laws. Woodruff believes that in order to have justice, you need six characteristics; however, I believe that justice is in the eye of the beholder. It will change, for better or worse by the events and people that shape and uphold it. Justice may be as simple as a slap on the wrist, or as treacherous as the destruction of a city. Perhaps justice, as a concept, is infinite; no more tangible than a dream, but there is no doubt that the role it serves in society is concrete, visible, and unyielding. ...read more.