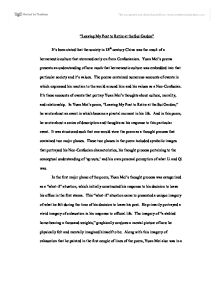 Leaving My Post to Retire at the Sui Garden

“Leaving My Post to Retire at the Sui Garden”

It’s been stated that the society in 18th century China was the result of a hermeneutic culture that stemmed early on from Confucianism.  Yuan Mei’s poems presents an understanding of how much that hermeneutic culture was embedded into that particular society and it’s values.  The poems contained numerous accounts of events in which expressed his reaction to the world around him and his values as a Neo-Confucian.  It’s these accounts of events that portray Yuan Mei’s thoughts about culture, morality, and relationship.  In Yuan Mei’s poem, “Leaving My Post to Retire at the Sui Garden,” he wrote about an event in which became a pivotal moment in his life.  And in this poem, he wrote about a series of description and thoughts as his response to this particular event.  It was structured such that one would view the poem as a thought process that contained two major phases.  These two phases in the poem included symbolic images that portrayed his Neo-Confucian characteristics, his thought process pertaining to the conceptual understanding of ‘sprouts,’ and his own personal perception of what Li and Qi was.

In the first major phase of the poem, Yuan Mei’s thought process was categorized as a “what-if” situation, which initially constructed his response to his decision to leave his office in the first stanza.  This “what-if” situation came to presented a unique imagery of what he felt during the time of his decision to leave his post.  He primarily portrayed a vivid imagery of exhaustion in his response to official life.  The imagery of “a stabled horse bearing a thousand weights,” graphically conjures a mental picture of how he physically felt and mentally imagined himself to be.  Along with this imagery of exhaustion that he painted in the first couple of lines of the poem, Yuan Mei also was in a response stage of uncertainty to his decision.  He questioned his motives through an analysis of self-imagery and self-reflection.  This was where he wrote “I gaze at the jade green brook; Are there changes in my looks?” He stared at himself in the “jade green brook” reflecting if there was “changes in his looks” as if he was questioning himself in order to analyze how much being an official had changed him.

In the second phase of his thought process, Yuan Mei went through a series of responses in the second stanza that led to his final affirmation to his decision.  Yuan Mei started this process by first presenting his action as an alternative path from the traditional life of a Confucian.  He wrote, “The whole garden’s full of hills; The hills are full of books.”  Within these two lines, he used the reference to the Sui Garden as a different path where one would find just as much fulfillment in it as that of an official’s life.  And because the purpose of life in this alternative path was the same, he could then justify why his decision was the right one.  Yuan Mei continued his response as he stated some then-present observations of his actions.  He wrote, “I’ve no shame and that’s my comfort,” as an indication that his action to leave office held no dishonor to himself and his family.  This just continued to be presented as a form of confidence to which lead to final affirmation to his response to the event.

Throughout the poem, there was a number of symbolic images that portrayed his  Neo-Confucian characteristics, his thought process pertaining to the conceptual understanding of ‘sprouts,’ and his perception of principle (Li) and pattern (Qi).

In the last two line of the poem, he wrote “I look to the wide distant space: Even birds fly at a leisure pace,” in order to exhibit a symbolic meaning of his freedom.  His freedom noted his restraint in life as an official.  And once he determined his decision to leave office, this restraint was forsaken.  This freedom that he symbolized coincided to that of some Daoist thoughts and principles concerning nature and man.  In Daoism, man was suppose to seclude himself within nature to find harmony and balance.  Yuan Mei did this indirectly by making reference to that of his Sui Garden and how there were still “full of hills” in them.  The hills, which were a symbolism to books, was what Yuan Mei considered his harmony and balance in life.  Yuan Mei also presented some Confucian thoughts and imagery in the lines, “The whole garden’s full of hills; The hills are full of books.”  Here he stated that as a Confucian, there was a need to better himself as a person.  And in order to accomplish this, it would be obtained through constant learning and education.  He stated that the “whole Sui Garden” still contained enough knowledge in them in which this process of betterment could still be continued.

In this poem, Yuan Mei also presented a superb conceptual understanding of the intentions of “sprout.”  The sprout concept was stated as “the beginning and the end of an action, the ability to recognize and make judgements early-on in the event,” by Confucius.  Yuan Mei’s actions within this poem agreed with that of traditional meaning.  His poem dispensed his ability to recognize the self-conscious actions of his decision to leave office.   Yuan Mei tried to rationalize and made judgements of what the consequences included, if any, in this particular response to this event.  And he concluded that there was none since he made a “no shame” comment near the end of the poem.

Yuan Mei also displayed in the poem, his own unique perception of Li and Qi.  Much of this poem portrayed many images relating to emotions.  His wrote about various things such as “drinking in abandonment,” “empty and vain,” and “no shame.”  He used these phrases and terms to show how emotions can be used in reference to principle as well as pattern.  The use of emotion in his poem presented the amount of integration of principle and pattern embedded into events that resulted to emotional responses.  His emotions in his poem helped define his moral character and values through his proper response to this pivotal moment in his life.

In conclusion, Yuan Mei’s poems did present an embodied viewpoint of the  hermeneutic culture in 18th century China.  And Yuan Mei as a person did have Neo-Confucian values which was presented constantly in his poems as his response to the events in his life.  This was specifically presented through the means of his usage symbolic images in his poems as a Neo-Confucian, his conceptual understanding of ‘sprouts,’ and his personal perception of Li and Qi.

“Leaving My Post to Retire at the Sui Garden”

Which was made by the long whip to run,

But suddenly set free in the hills

So this body is now all mind!

The royal minister of yesteryear

Now retires to go back to the fields.

No word’s exchanged in the farewell party;

I only drink with abandonment.

I gaze at the jade green brook:

Are there changes in my looks?

The hills are full of books.

Each thing is in its place,

Is Master set to go home?

Children send me on my way

With incense along the road.

I smile when I look at them,

For fame, too, seems empty and vain.

I’ve no shame and that’s my comfort;

To come or go is my privilege.

I look to the wide distant space:

Even birds fly at a leisure pace.