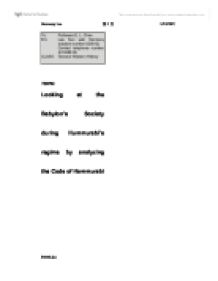 Looking at the Babylon's Society during Hummurabi's regime by analyzing the Code of Hammurabi.

To: Professor E. L. Chan Fm: Lee Sun wah Hermony (student number 020012) Contact telephone number (81028818) CLASS: General Western History TOPIC Looking at the Babylon's Society during Hummurabi's regime by analyzing the Code of Hammurabi CONTENTS TOPIC 1 Looking at the Babylon's Society during Hummurabi's regime by analyzing the Code of Hammurabi 1 Introduction 3 Background 3 Research Problem: 3 Objective: 3 Methodology: 3 Approach: 3 Remarks/Legends: 3 B. Hammurabi & his Codes 4 C. Political Aspect 4 God 4 Offence of God 4 God be the Judge 4 God be the Witness 5 God be the Final Resort 5 The King 5 Offence to the King 5 King being Ultimate Beneficiary 5 King being Setter of Standards 6 The Elders 6 D. Economical Aspect 6 Introduction 6 Gold Standard 6 Agriculture Industries 7 Agricultural 7 Role of Ox 7 Types of corps 7 Herd Raising 8 Commerce 8 Unit 8 Money 8 Occupation 9 Trading 10 Banking 11 Forms of contract 11 E. Sociological Aspect 11 Social Structure 11 Social Class 12 F. Appendix: The Code of Humurrabi 14 Introduction Background Hammurabi is amongst the famous rulers in the Ancient Babylon. The discovery of the Hammurabi Code and the legal principle it has on the western legal system is vital in many respect. In fact, scrutinizing the code in details reveals a lot of legal principles tablete I the code is still widely adopted in many cotinential legal systems. The Code is now recognized the oldest proved legal piece. The introduction of the Code in the Ancient Babylon brings stability and rapid growth in those days. The author is interested to look at the society of the Ancient Babylon as revealed in the code. Research Problem: 1. how did the ancient society look like? Objective: 1. To understand the society of Ancient Babylon by studying the code of Hammurabi. Areas of focus are: a. ...read more.

59. If any man, without the knowledge of the owner of a garden, fell a tree in a garden he shall pay half a mina in money. 60. If any one give over a field to a gardener, for him to plant it as a garden, if he work at it, and care for it for four years, in the fifth year the owner and the gardener shall divide it, the owner taking his part in charge. 61. If the gardener has not completed the planting of the field, leaving one part unused, this shall be assigned to him as his. 62. If he do not plant the field that was given over to him as a garden, if it be arable land (for corn or sesame) the gardener shall pay the owner the produce of the field for the years that he let it lie fallow, according to the product of neighboring fields, put the field in arable condition and return it to its owner. 63. If he transform waste land into arable fields and return it to its owner, the latter shall pay him for one year ten gur for ten gan. 64. If any one hand over his garden to a gardener to work, the gardener shall pay to its owner two-thirds of the produce of the garden, for so long as he has it in possession, and the other third shall he keep. 65. If the gardener do not work in the garden and the product fall off, the gardener shall pay in proportion to other neighboring gardens. 100. ... interest for the money, as much as he has received, he shall give a note therefor, and on the day, when they settle, pay to the merchant. 101. If there are no mercantile arrangements in the place whither he went, he shall leave the entire amount of money which he received with the broker to give to the merchant. ...read more.