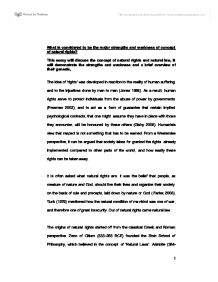 major strengths and weakness of concept of natural rights?

What is considered to be the major strengths and weakness of concept of natural rights?

This essay will discuss the concept of natural rights and natural law, it will demonstrate the strengths and weakness and a brief overview of their genesis,

The idea of ‘rights’ was developed in reaction to the reality of human suffering and to the injustices done by man to man (Jones 1994). As a result, human rights serve to protect individuals from the abuse of power by governments (Freeman 2002), and to act as a form of guarantee that certain implied psychological contracts, that one might assume they have in place with those they encounter, will be honoured by these others (Gisby 2008). Humanists view that respect is not something that has to be earned. From a Westernise perspective, it can be argued that society takes for granted the rights already implemented compared to other parts of the world, and how easily these rights can be taken away.

It is often asked what natural rights are. It was the belief that people, as creature of nature and God, should live their lives and organize their society on the basis of rule and precepts, laid down by nature or God (Farlex 2008). Tuck (1979) mentioned how the natural condition of mankind was one of war, and therefore one of great insecurity. Out of natural rights came natural law.

The origins of natural rights started off from the classical Greek and Roman perspective. Zeno of Citium (333-263 BCE) founded the Stoic School of Philosophy, which believed in the concept of ‘Natural Laws’. Aristotle (384-322 BCE) who was associated with this school of thought claimed that society had a natural basis, that the human good is grounded naturally, and that we are capable of apprehending that goodness through our natural reason (Baggini & Fosl 2007).

Natural law is law that is unwritten, unobserved and has never been enacted (Waldron 1984), but theorists claim that these rights are known to ‘reason’. Margaret McDonald argued ‘there was a gap between reason and natural rights that natural-rights theorists had failed to bridge’ (Freeman 2002).  Not everyone reasons in the same way. The majority of people can be trusted to live life doing the right thing, but there is always going to be that small percentage of people who can not be trusted. This is evident in today’s society by the number of people in prison for committing crimes. Luckily, due to the decline of natural rights it has allowed to government intervene and deal with them appropriately.

Then came Thomas Aquinas and Hugo Grotius. These two theorists kept the Stoic school of thought alive, as they integrated Aristotelian philosophy into Christian theology (Jones 1994).

Thomas Aquinas (c. 1225-1274) held that the natural is the “eternal law” of God as it is manifest in the natural world (Baggini & Fosl 2007). According to Aquinas man was, by his God-Given nature, a social and political animal. He lived as God intended him to, and he was able to achieve the good earthly life that God had ordained for him only by co-operating with others in an organised political community (Jones 1994). He located the natural law in the activity of natural human reasoning (Baggini & Fosl 200;l. -7).

Afterwards came Thomas Hobbes (1588-1679). Hobbes drew a sharp distinction between right and law.  A right was a liberty and law was a restraint; making them opposites (Freeman 2002). He thought of natural rights as those rights individuals would enjoy in the state of nature. Nevertheless, Hobbes understood what state society would be in if there was no government (Jones 1994). He believed that all humans were equal in terms of their desires and abilities, but their natural egoism combined with competition for limited resources leads to a state of perpetual war of all against all, in which life is “solitary, poor, nasty, brutish and short” (Hayden 2001). Consequently, Hobbes saw the need for a social contract. This was an agreement on the part of everyone in society to give up some of their rights in return for the rules governed by the state to promote a measure of peace and order (Gisby 2008).

However, Jean-Jacques Rousseau (1712-1778) disagreed with Hobbes. He saw that it was society that was rotten not nature (Gisby 2008).  Rousseau believed the social contact deprived man of his liberty and distorted his nature and made him bad, leading him to imagine that he needs even more rules in order to get along with one another (Gisby 2008).

After Hobbes came John Locke (1632-1704). Locke believed in the existence of Natural Law and regarded it as the best indicator of what was ‘right’. He assumed that God was the source of human rights, and that everyone had a responsibility to God to observe the law of nature (Freeman 2002). Unlike Hobbes, Locke held that people were decent beings, far more prone to reasonable and peaceful behaviour (Gisby 2008). however, Locke agreed that a social contract was needed, because people could be selfish and self interested (Gisby 2008). As a result, Locke came to the conclusion that ‘we’re all free to do whatever we want, provided we don’t harm anyone else’s life, health, liberty or possessions’ (Gisby 2008). However, Locke and Rousseau disagreed on the meaning of ‘property’. Rousseau saw ‘property’ as theft, whereas Locke saw ‘property’ as real significant feature of life and one that he could ‘see’ in natural law (Gisby 2008).

After Locke came Thomas Paine (1732-1809). Pained never created a new theory, but he wrote one of the most influential books called ‘The Rights of Man’ which was written in the wake of the 1789 French Revolution (Hayden 2001).

Then came Edmund Burke and Jeremy Bentham, who both shared a common dislike for natural rights. The French Revolution provoked them both to take a critical stance against the notion of natural rights (Gisby 2008).  It\ was chaos as everyone wanted ‘The Rights of Man’ where everyone had a right to what ever they wanted due to the law of nature. However, this resulted in mayhem, terror and bloodshed (Gisby 2008).

Edmund Burke (1729-1797) saw that it was easy to dream up a wish list of ‘rights’ and to claim that you’re entitled to them by the law of nature, but it was an approach that took no account for the realities of life. In Burke’s view in promising everything to everyone they left the entire society disinclined to furnish anything for value for anyone (Gisby 2008). He understood that most people can not be trusted to do the right thing.

Jeremy Bentham (1748-1832) founded the Utilitarian School. For Bentham, natural rights were nonsense and only legal rights had any real force (Gisby 2008). Once natural rights had been detached from the concept of divine law, Bentham argued, they were based on nothing at all (Freeman 2002). Utilitarianism rejected natural rights as unscientific and insubordinate of social order, whereas the principle of utility was a factual, objective standard by which the goodness or badness of laws could be evaluated (Freeman 2002). Furthermore, the principle of utility evaluated inequality by its contribution to the general good, and thereby avoided the absurdities of the natural-rights approach (Welch 1984: 193-4; Hart 1982:82; Waldron 1987:36, 88-9, 42-3).

After giving the history of natural rights, it can be argued that Jeremy Bentham and Edmund Burke had the correct idea about natural rights. They saw that society could not live as nature had intended. Furthermore, it can be seen that Hobbes and Locke did not fully believe in the concept of natural rights either, because they both saw the need for a social contract as they noticed that people could be selfish and intrinsically violent.

This tells the reader that standing up for rights seem to be inconvenient, also perceived to be frightening to be faced with the prejudice that unfortunately pervades the profile movements, It can be a frustrating to back leader  who will support our causes, who will see the unifying of respect for free will, liberty, and life and Accountability.  This can be damaging to be unwanted and misunderstood even by friends, family and society, to feel odd which could even be amongst the outcast. Being profile can leave us politically homeless, rejected and ridiculed.