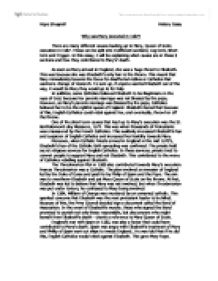 Why was Mary executed in 1587? There are many different causes leading up to Mary, Queen of Scots execution in 1587. These can be split into 3 different sections; Log term, Short term and Trigger. In this essay, I will be explaining what causes are in these 3 sections and how they contributed to Mary's' death. As soon as Mary arrived in England, she was a huge threat to Elizabeth. This was because she was Elizabeth's only heir to the throne. This meant that Mary immediately became the focus for disaffected nobles or Catholics that wanted a change of monarch. To sum up, if anyone wanted Elizabeth out of the way, it would be Mary they would go to for help. In addition, some Catholics believed Elizabeth to be illegitimate in the eyes of God, because her parents marriage was not blessed by the pope, However, as Mary's parents marriage was blessed by the pope, Catholics believed her to be the rightful queen of England. ...read more.

The Throckmorton Plot in 1583 also contributed towards Mary's execution. Francis Throckmorton was a Catholic. The plan involved an invasion of England led by the Duke of Guise and paid for by Philip of Spain and the Pope. The aim was to overthrow Elizabeth and put Mary Queen of Scots on the throne. At first, Elizabeth was led to believe that Mary was not involved, but when Throckmorton was put under torture, he confessed to Mary being involved. In 1584, William of Orange was murdered by an unnamed catholic. This sparked concerns that Elizabeth was the next protestant leader to be killed. Because of this, the Privy Council decided sign a document called the Bond of Association. In the event of Elizabeth's murder, those who signed the Bond promised to punish not only those responsible, but also anyone who might benefit from Elizabeth's death - clearly a reference to Mary Queen of Scots. ...read more.

In June, Babington sent a letter to Mary telling her about the plot. Mary's reply, on 18th July, contained her approval of the plot, including plans for the murder of Elizabeth. This finally gave Walsingham the vital proof he needed of Mary's guilt. Mary's trial began on 15th October. She was found guilty, however, she was not executed until the 8th February 1587. In conclusion, all 8 of these factors contribute to Mary's death. They all fit together, like a jigsaw, to create the final picture. Without one piece, the puzzle would not be complete. For example, if the Babington Plot had not have happened, Mary might have survived, and lived on to be the Queen of England. So, in all , you can not determine one specific cause that lead to her execution ; it's impossible. But, it is possible to see that all of them happened for a reason, and maybe it happened for the best. ?? ?? ?? ?? Hope Strugnell History Essay ...read more.