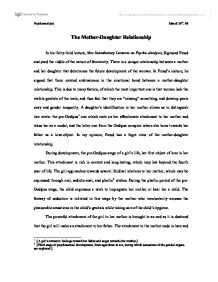 In his thirty-third lecture, New Introductory Lectures on Psycho-Analysis, Sigmund Freud analyzed the riddle of the nature of femininity. There is a unique relationship between a mother and her daughter that determines the future development of the woman. In Freud’s lecture, he argued that there existed ambivalence in the emotional bond between a mother-daughter relationship. This is due to many factors, of which the most important one is that women lack the visible genitals of the male, and thus feel that they are “missing” something, and develop penis envy and gender inequality. A daughter’s identification to her mother allows us to distinguish two strata: the pre-Oedipus[1] one which rests on her affectionate attachment to her mother and takes her as a model, and the latter one from the Oedipus complex where she turns towards her father as a love-object. In my opinion, Freud has a bigot view of the mother-daughter relationship.

During development, the pre-Oedipus stage of a girl’s life, her first object of love is her mother. This attachment is rich in content and long-lasting, which may last beyond the fourth year of life. The girl approaches towards several libidinal relations to her mother, which may be expressed through oral, sadistic-anal, and phallic[2] wishes. During the phallic period of the pre-Oedipus stage, the child expresses a wish to impregnate her mother or bear her a child. The fantasy of seduction is initiated in this stage by the mother who involuntarily arouses the pleasurable sensations in the child’s genitals while taking care of the child’s hygiene.

The powerful attachment of the girl to her mother is brought to an end as it is destined that the girl will make an attachment to her father. The attachment to the mother ends in hate and is accompanied by hostility. The child’s hostile feelings are justified by a list of accusations and tribulations against the mother. Firstly, the mother gave too little milk thus signifying a lack of love for the child. The child’s craving for nourishment is insatiable, thus it never gets over the pain of losing a mother’s milk. The next accusation appears with the arrival of a new baby in the nursery. Oral frustration is preserved and the child receives less maternal care. Thus, the child feels a jealous hatred for the new baby and grievance for an unfaithful mother. Much of the child’s hostility towards its mother is from sexual wishes which cannot be satisfied. The strongest of these frustrations occurs during the phallic period if the mother forbids pleasurable activity with the genitals. The more a child loves its object, the more sensitive it is towards disappointments and frustrations from the object, which leads to accumulated hostility. However, in this list of accusations towards a child’s mother, it refers to both boys and girls. Therefore, Freud questioned the reason why girls terminated their attachment to their mother compared to boys who continued to love them.

Anatomical distinction between the sexes expresses itself in physical consequences. In a women’s mind, a penis has a higher chance of obtaining power, money, respect from others, and self-respect. Thus, girls hold their mothers responsible for a lack of penis and do not forgive her for this disadvantage. This is known as the castration complex. It starts when the genitals of the other sex are viewed; girls declare that they want to have ‘something like it’ and fall victim to the ‘envy of the penis.’ For many years, they continue to hope that something like it will grow, and this thought remains in their unconsciousness and retains a considerable emotional energy. This drives a woman to carry an intellectual profession, which to Freud is recognized as a sublimed modification of the repressed wish for a penis. The girl first regards the castration as an individual misfortune, but then extends this to other females and her mother. After discovering that her mother lacks a penis, she drops her as a love-object because her value is debased. The motives for hostility have accumulated even more now.

According to Freud’s view, ‘penis envy’ directs the girl’s attention towards her father for the expectation of the penis which her mother had refused her. The girl has now abandoned her mother as a libidinal object, and transformed her sexuality from an active (masculine) to a passive (feminine) one. Her attachment has transferred to her father and the love for her mother has been repressed. The Oedipus complex is the attraction of a girl to her father and rivalry with her mother. She despises her mother more so because of the daughter-father-mother love triangle. She believes that she will gain a penis if the father impregnates her. This wish is repressed and held in the unconscious where it mobilizes jealousy and death wishes for the mother and so threatens a loss of the mother's love.

A universal Oedipus complex is the origin of all our psychological disorder, Freud inadvertently developed a straightforward rationale for understanding the wish-fulfilling origin of what he himself had went through. He had sexual conflicts within himself which he did not resolve. His belief in bisexuality was an excuse for certain personal traits. Former analysts tend to attract those with a personality similar to Freud's who are passive men and aggressive women. In my opinion, Freud’s theory about the ambivalent relationship between a mother-daughter dyad is sexist. He believes that females rank males on a higher level because of their anatomical distinction. Freud has made a generalization of women by stereotyping them with ‘penis envy.’ To apply his theory to myself, I have not exhibited or felt the need to have a penis. There is an ambivalent nature to a mother/daughter relationship; however, Freud’s deterministic view does not justify it. A young girl identifies exclusively to her mother. We can place the ambivalent relationship to a good/bad image of a mother. The ‘good mother’ allows the daughter to have space and form her autonomous self. The ‘bad mother’ does not allow this differentiation, and she places her needs and wants before her daughters. Every child faces the dilemma of maternal care after a new baby is born. However, this phase passes and those hard feelings are let go with age. Freud’s theory explains the division of roles between the sexes but it does not recognize social influence and relies towards natural or biological development. This is an argument from nature, and hence Freud’s theory is amorphous.

There is hostility between mothers and daughters because of the natural intensity of their relationship. According to Freud, a girl passes through many stages in the development of her character, from loving her mother in the pre-Oedipus stage, to the castration complex, and finally to the Oedipus-complex. The hostility towards a mother is because girls do not have a penis and blame their mother for the lack of one. To Freud, the theory does not apply to a mother-son because girls have to change their erotogenic zone and love-object, both of which a boy retains. Personally, Freud’s view is sexist to me and feminists. Freud degrades women by characterizing them as having ‘penis envy.’ There is a complicated relationship between a mother and daughter that can be described by the interaction of a mother with her daughter.

[1] [A girl’s romantic feelings toward her father and anger towards her mother.]

[2]  [Third stage of psychosexual development, from ages three to six, during which sensations of the genital organs are explored.]