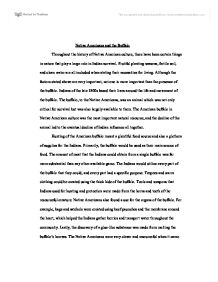 Native Americans and the Buffalo

Native Americans and the Buffalo Throughout the history of Native American culture, there have been certain things in nature that play a large role in Indian survival. Fruitful planting seasons, fertile soil, and clean water are all included when stating their necessities for living. Although the factors stated above are very important, not one is more important than the presence of the buffalo. Indians of the late 1800s based their lives around the life and movement of the buffalo. The buffalo, to the Native Americans, was an animal which was not only critical for survival but was also largely available to them. The American buffalo in Native American culture was the most important natural resource, and the decline of the animal led to the eventual decline of Indian influence all together. Hunting of the American buffalo meant a plentiful food source and also a plethora of supplies for the Indians. Primarily, the buffalo would be used as their main source of food. The amount of meat that the Indians could obtain from a single buffalo was far more substantial than any other available game. ...read more.

White settlers moved into the west, under the campaign of Manifest Destiny. America began to expand West in the hope of new commerce and transportation opportunities, the Native Americans and buffalo stood in their way. Americans looked to form a transcontinental railroad, which would allow trade and the movement of goods across the country. With the construction of the railroad, new cities and towns came into existence. More and more settlers moved into these towns with the hope of starting new lives. Because of this, there were no longer large grassy plains for buffalo to graze and buffalo started to die. Another reason for the depletion of buffalo was due in part that American settlers began hunting buffalo as a sport. This action completely disregarded the importance of these animals to the lives of Indians. Native Americans started noticing their prized resources slowly decline. As a result of this sport, the population of buffalo rapidly dropped throughout the plains of the West. Americans hoped that the killing of buffalo also would lead to the death of the Native Americans. ...read more.

They dealt with this problem by taking Indians away form the rightfully owned land. To deal with the problem of Indian displacement, the government set up reservations where Native Americans could live. These reservations soon became poverty stricken and desolate. Indians began believing that the future of their culture was being wiped out completely. In summary, the importance of the buffalo to Native Americans was immeasurable. The Indians relied on this animal for food, weapons, supplies, and materials for their homes. During the construction of the transcontinental railroad, and the mentality of Manifest Destiny, a wave of new white settlers decreased the population of the buffalo. Also the killing of these animals began to show signs of death for Native Americans and their historical culture. Assimilation began between the white and Native American culture and soon Indians had no identity. Although whites pushed Native Americans onto reservations, their actions towards Indians had showed complete disregard and disrespect. The American buffalo in Native American culture was the most important natural resource, and the decline of the animal led to the eventual decline of Indian influence all together. ...read more.