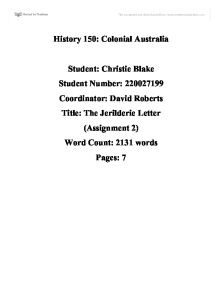 Ned Kelly and the Jerilderie Letter

History 150: Colonial Australia Student: Christie Blake Student Number: 220027199 Coordinator: David Roberts Title: The Jerilderie Letter (Assignment 2) Word Count: 2131 words Pages: 7 Christie Blake Page 1 The Jerilderie Letter written by Ned Kelly, as a source illuminates many issues that were relevant in Kelly's time. However, with all sources there are challenges that the historians who are interpreting them face when trying to illuminate the circumstances surrounding them. The Jerilderie Letter is a primary source, a letter dictated to Joe Byrne by the famous outlaw Ned Kelly in 1879. It was the second letter from the Kelly Gang, its predecessor the Cameron Letter being written in 1878.1 The letter is named after the town of Jerilderie in New South Wales, where the Kelly Gang was, at the time of the letter's writing, in the middle of a hold-up of the town. The author Edward 'Ned' Kelly, was born in 1855 to Ellen and John Kelly, both being from poor Irish backgrounds and having arrived in Australia in 1842.2 Ned's upbringing was on of hardship, his father dying in 1866 after years of struggling to eke an existence as a farmer and rural labourer, his widowed mother then moving the family to Greta in north-eastern Victoria.3 It was these experiences that coloured Kelly's life and especially highlighted the battle between squatters and selectors that forced Ned into his famous life of banditry. ...read more.

Blake Page 3 devastating the country.8 Land reform campaigners also used the 'yeoman' ideal to popularize selector acts and to induce people who saw the commercial success of agriculture to settle in New South Wales and Victoria.9 The land campaign was inspired by a dream of agrarian harmony, according to Stuart MacIntyre the 'land reformers envisaged a society of self-sufficient producers that would channel the energies of the people into productive contentment'.10 However, the Selection Acts proved difficult to implement in the manner intended. The squatters were reluctant to part with what they envisaged as 'their' land and employed a variety of dubious means to destroy the ambitions of the selectors. According to John McQuilton over 80 percent of squatters obstructed selection in a variety of ways.11 The squatters were able to achieve this by occupying positions of power and influence in the local level townships and by using their detailed knowledge of the land on the runs. Armed with this power they set about obstructing selectors through means ranging from purchase at auction, the use of legal loopholes, 'dummying' and the corruption of local officials, as well as 'peacocking'. 'Peacocking' or 'picking the eyes out of the land' meant the squatters used their pre-emptive right of purchase to secure the best of the land, usually the land adjacent to the main watercourse or with road access, leaving the land alongside unattractive ...read more.

authorities are shown to have begun with his conviction after an altercation with a Mr McCormack in which the police took the side of the wealthy squatter over Ned. This illustrates the exact unfairness of the authorities that was being felt by the selectors across the board. However well Ned's Jerilderie Letter illustrates certain issues of the time, there are several factors to be wary of when it comes to his opinions. As an Irish selector who had endured a life of hardship and had been at odds with squatters, his account is highly biased on the side of the selectors and to that effect only illustrates one side of the struggles between the two groups. He is also highly prejudiced against the authorities; however this may be because he was an outlaw on the run who had committed many crimes including killing police officers and saw placing the blame on the police as a way to show his righteousness, not because there had actually been any ill-treatment of him by the police. Although there are challenges in interpreting Kelly's source there is no denying the Jerilderie Letter is unmistakably a very important document in illuminating the struggles of the time. The historian who examines the Letter is given a valuable insight into the Christie Blake Page 6 squatter/ selector struggles and its wide-reaching issues in the time of Ned's extraordinary life. ...read more.