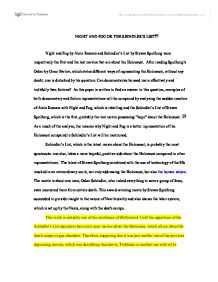 Without any doubt, Schindler's List is still very grieving, and it makes people feel terrible and cry, but at least, it does not show the horrible reality that people used to see.[ML7] If, today, the discussion of representation for these works was brought up, Night and Fog by Alain Resnais would fit better to the requirements of a Holocaust representation compared to Steven Speilberg's Schindler's List. Some people say that Night and Fog is too old and some of the events might not have been discovered, but as a documentary, it is very natural, neither exaggerated like other Holocaust movies, nor like happily ending ones, including [ML8]Schindler's List.[ML9] In the movie, the concentration camps, with the fingerprints, and some recordings from the World War II, which have nothing to do with discovering events during the Holocaust, are exposed to the viewer. It is also another point of view that Night and Fog is too short for a representation.[ML10] Yes, it is short, but it is very precise, just focusing the Holocaust and especially the concentration camps.[ML11] It is neither like Claude Lanzmannz's Shoah, which is boring and lasts nearly ten hours, nor like fictional ones, during which, I curiously wait the end of the movie rather than paying attention of details of the event or environment. ...read more.

Anyway, your writing is definitely improving. B- [ML2]This main claim is very vague and doesn't help the reader to follow the argument to come. You should mention that you think SL is good in the way that it presents a hopeful message, but Night and Fog is ultimately more representative. Then the reader will know where you are heading. [ML3]resulted in [ML4]human values [ML5]Was the film quickly made by virtue of appearing "only" 10 years after the war? And in what ways does it seem quickly made? [ML6]I think you mean to say "fiction movie." [ML7]good, balanced point [ML8]Delete indicated text [ML9]The way that many parts of this sentence are pieced together sounds awkward. One might say, "Some people say that N+F is too old and some of the events might not have been discovered, but as a documtary, it is very natural . . . " [ML10]who says this? [ML11]Good point; well stated [ML12]The passive voice, "it is assumed" sounds awkward. Who assumed? You might say, "it seems that Spielberg . . . " But do you think the black and white was meant to make the film more watchable? Emir Kisagun 4 ...read more.