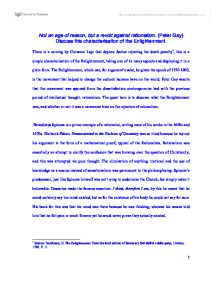 Not an age of reason, but a revolt against rationalism. (Peter Gay) Discuss this characterisation of the Enlightenment.

Not an age of reason, but a revolt against rationalism. (Peter Gay) Discuss this characterisation of the Enlightenment. There is a carving by Giovanni Lapi that depicts Justice rejecting the death penalty1, this is a simple characterisation of the Enlightenment, taking one of its many aspects and displaying it in a plain form. The Enlightenment, which can, for argument's sake, be given the epoch of 1750-1800, is the movement that helped to change the outlook humans have on the world. Peter Gay asserts that the movement was spurned from the dissatisfaction contemporaries had with the previous period of intellectual thought: rationalism. The quest here is to discover what the Enlightenment was, and whether or not it was a movement bent on the rejection of rationalism. Benedictus Spinoza is a prime example of a rationalist, writing most of his works in the 1660s and 1670s. His book Ethics, Demonstrated in the Fashion of Geometry was so titled because he lay out his argument in the form of a mathematical proof, typical of the Rationalists. Rationalism was essentially an attempt to clarify the confusion that was brewing over the question of Christianity, and this was attempted via pure thought. ...read more.

The Enlightenment certainly was not purely and ideological and spiritual movement, it was the first intellectual movement to capture the imagination of society as a whole. "Indeed it may be helpful to see the Enlightenment as precisely that point in European history when... the secular intelligentsia emerged a relatively independent social force."3 The most important point in Porter's statement, is that these people were a 'social force', this meant they were influencing society through their teachings, writings and ideas. The phrase Enlightened Absolutism was coined not by eighteenth century scholars, but by modern historians who decided that the domestic reforms required after the wars in Europe coincided conveniently with the plethora of absolute rulers at the time. The Enlightenment saw the concept of patrimonial and legal despotism as the most desirable form of rule as it was the most reasonable. The idea of and Enlightened despot or absolutist is somewhat flawed, in as much as it is very difficult to find a ruler who both deemed himself to be part of the Enlightenment and believed in the fundamentals of the movement, such as faith in science. ...read more.

The fact remains that the age with which the Enlightenment is associated, that is 1750-1800, was without doubt an age of reason. From Bayle to Berkely, the enlightened individuals were putting their faith in science and their senses to discover answers about the world. Rationalists had done the same, but put their faith in their mind and thoughts instead of senses. Both groups were striving away from the irrationality of the Church, searching for a feasible explanation for human existence, which the Church could not provide. It took millions of years for man to discover reason, for it to take a further fifty or one hundred to discover a different kind of reason, does not amount to revolt. It is my belief that for the Enlightenment to reach its conclusions, the existence of Rationalism was necessary to inspire further thought. Similarly, it is my belief that the Christianity's existence was paramount to the emergence of Rationalist thought. None of these things are a revolt against the other, but an augmentation of their ideas. The revolt against rationalism cannot replace the age of reason, for they are one and the same thing. For mankind to be at the intellectual point we are in the twenty-first century, it was necessary for the Enlightenists to be reasonable in their search for an alternative path to rationalism. ...read more.