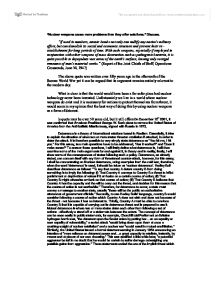 &quot;Nuclear weapons cause more problems than they offer solutions.&quot; Discuss.

"Nuclear weapons cause more problems than they offer solutions." Discuss. "If used in numbers, atomic bombs not only can nullify any nation's military effort, but can demolish its social and economic structure and prevent their re-establishment for long periods of time. With such weapons, especially if employed in conjunction with other weapons of mass destruction such as pathogenic bacteria, it is quite possible to depopulate vast areas of the earth's surface, leaving only vestigal remnants of man's material works." (Report of the Joint Chiefs of Staff, Operations Crossroads, June 30, 1947) The above quote was written over fifty years ago in the aftermath of the Secone World War yet it can be argued that its argument remains entirely relevant to the modern day. What is clear is that the world would have been a far safer place had nuclear technology never been invented. Unfortunately we live in a world where nuclear weapons do exist and it is necessary for nations to protect themselves from threat, it would seem in my opinion that the best way of doing this by using nuclear weapons as a form of deterent. is quote may be over 50 years old, but it still offersOn December 12th 2001, it was confirmed that American President George W. Bush plans to remove the United States of America from the Anti-Ballistic Missile treaty, signed with Russia in 1972, Deterrence is a theory of International relations based in Realism. Essentially, it tries to explain the situation of when two or more states threaten retaliation if attacked, in order to deter the attack. It is therefore possible to very simply state deterrence as "You hit me, I hit you." For this essay, two main questions have to be addressed, 'Has it worked?' and 'Does it make sense?' To answer these questions, I will firstly define what deterrence is, I will then examine some of the main arguments for and against it, in theory and in reality; finally, I will show some of the consequences of states following such a policy. ...read more.

A situation where Walzer feels that it is better to be killed in a nuclear holocaust than not have basic human rights perceived not to be allowed in the soviet Union. The defence has a definite western bias to it, portraying the Soviets as the evil expansionists and would attack if countries such as the United States did not issue such threats. Whilst it cannot be said that the United States was not under any threat, it is difficult to say whether the perceived threat from the Soviets was as a consequence of issues such as deterrence, which can be seen to have led to the build up of arms and escalations in wars in the third world, or if deterrence indeed managed to prevent the Soviets from attacking and the other related issues were not connected or led to deterrence. The criticisms of deterrence are quite widespread, they fall in to two broad overlapping categories, theoretical and practical. Theoretically, the concept has internal contradictions which in order to understand, have to be considered in the broader context of realism. Realism is based on the assumption that states act rationally and that two states in a similar situation will act in a similar way, regardless of internal (i.e. cultural) differences. This is the so called billiard ball approach of realism: where each state is a billiard ball on the world system table. an interaction by two or more balls on the table is governed by the laws of physics, similarly, an interaction between two or more states is governed by "the same 'cool and clearheaded ends-means calculation' based on perfect information and a careful weighing of all possible alternative courses of action," in short, states act rationally. The first principle of realism is for the state to defend itself and its citizens from other states. The superpowers tried to defend themselves and their citizens by deterrence, a preventative method of ensuring peace. ...read more.

There appears to be other ways in which the nuclear problem may have been solved, the most obvious is not to build the bombs in the first place. However, the lack of trust between the two superpowers - who were enemies, as expressed in Game theory shows how the building of arms is almost unavoidable. Trust, or the lack of it, appears to be the driving motive behind deterrence and shows its strong links with realism, depicting the world as an anarchy where co-operation and trust are at best, minimal. The two sides did not trust each other on a number of levels, firstly they did not trust each other not to make the weapons, secondly they did not trust each other to use them in a pre-emptive strike and thirdly they did not trust each other not to use them in a retaliatory or second strike capacity. This third level of trust appears the reason why a nuclear war never has broken out. Both sides are more than aware of the consequences and are unwilling to call each others bluff. Deterrence therefore is a game of bluff, it is about convincing the enemy that a country is irrational enough to go MAD (Mutual Assured Destruction). In the nuclear context, it only works whilst each side believes that the threat is real - the countries involved believe each other irrational enough to use it. The threat has to be a credible one but if it was ever carried out it will be disastrous. Deterrence is based on actors being rational in deterring potential aggression but find themselves in an irrational situation, effectively signing themselves to suicide if war ever broke out. Deterrence ultimately is a very dangerous game of bluff which only works whilst everyone believes in it. Theoretically it is irrational and based on emotions of revenge and so does not make much sense in the realist perspective to which it is set. ...read more.