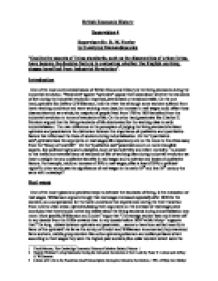 British Economic History Supervision 4 Supervisor:Dr. D. M. Fowler by:Lambros Diamandopoulos ''Qualitative aspects of living standards, such as the disamenities of urban living, have become the decisive factors in evaluating whether the English working classes benefited from Industrial Revolution''. Introduction One of the most controversial issues of British Economic History is the living standards during the industrial revolution. ''Pessimists'' against ''optimists'' oppose their ideas about whether the standards of live during the industrial revolution improved,deteriorated or remained stable. On the one hand,optimists like Jeffrey G.Williamson, held the view that although some workers suffered from harsh working conditions and were working more days,the increase in real wages could offset these disamenities and as a whole,the majority of people lived from 1760 to 1850 benefited from the industrial revolution in terms of standards of life. On the other hand,pessimists like Charles H. Feinstein argued that the living standards of life deteriorated for the working class in early industrialisation. The main difference in the perception of judging the living standards between optimists and pessimists is the distinction between the importance of qualitative and quantitative factors that influenced the lives of workers during industrialisation. On the ''quantitative side'',optimists base the arguments on real wages,life expectancy and on the move to the cities away from the ''idiocy of rural life''.1 On the ''qualitative side'' pessimists count on more intangible aspects, like political rights,work discipline,hours of work,fertility and infant mortality. To answer to this really controversial issue of standards of life of working class during industrial revolution we have to weight the any qualitative benefits in real wages and to subtract any losses of qualitative factors. ...read more.

Pessimists argue that if nominal wages are ''deflated'' by qualitative factors,then this increase in wages will not be so significant. Working Hours The industrial revolution has been synonymous with long hours of arduous toil often by children and women who were working under unhealthy conditions. The working years in 'Europe's dark satanic mills' were the longest recorded in human history and compared to these,the working week in the Third World Today seems to be short. The question that rises immediately is if these exhausting working schedules existed before the Industrial Revolution or created as a consequence of the higher demand of labour force during industrialisation. Unfortunately,the figures for working hours before the Industrial Revolution are very rare and pre-industrial societies seem to had irregular hours of work. This increase in working hours during industrialisation can be explained by the fact that factories in order to be more competent had to intensify the production which in turn led to more consistent hours of work. The same applies for the agricultural sector since capitalist agriculture requires more discipline among the labour force. Voth6 in 2001 using court records of the Old Bailey in London,concluded that male workers in 1830 and in 1850 were working more than their great-grandparents did in 1760.Voth also found that hours of work increased by maybe 23% but they remained at this level before they start falling again. This increase however was not a result of bigger working days,but it seems that people were working more days during the year. ...read more.

Pressure on the press was even higher in times of social suppression like for example the period of 'six Acts' in 1819.However,the reduction in stamp duty after 1836 and the right for defense of truth against a charge of criminal libel,led to the increase of newspaper circulation and to the creation of radical organs like the Chartist Northern Star (1837) Conclusion The fact that there is still the debate between pessimists and optimists,indicates that neither side could provide unambiguous arguments to support its views. On the one side of the coin,pessimists argue that any increase in the real wages occurred because of the increase in working hours in unhealthy,dark and disease-ridden environment. Apart from this,the transition from rural areas to industrialised cities with high mortality and especially infant mortality,reduced more any benefits from higher real wages. On the other side of the coin,very hardly can anyone not be optimist in the long run. The period of 1750-1850 allowed Britain to escape from Malthusian constraints and become a modern industrial country. In my opinion,an individual can judge the standards of life of the working class during industrial revolution according to his/her own beliefs of what really is significant. If the most important is the real wages,then for sure optimists would ''win'' in this debate ,whereas if what really matters is the quality of the environment in which one grows then the opposite would happen. It is the eternal dispute between quality and quantity. There will always be fanatic supporters of both sides. ...read more.

This essay explores the main themes well and covers all areas of the topic in reasonable depth. It makes a decent argument, although this could be developed further, and more closely argued.