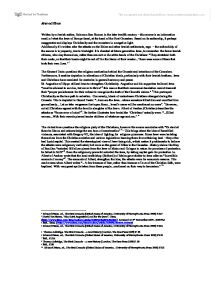 Written by a Jewish author, Solomon Ben Simson in the later twelfth century - this source is an informative recall of what the Jews of Europe faced, at the hand of the First Crusaders. Based on its authorship, it perhaps exaggerates and displays Christianity and the crusaders in a negative light. Additionally it's written after the attacks on the Rhine and other Jewish settlements, ergo - the authenticity of the source is in jeopardy, due to hindsight. It is directed at future generation Jews, to remember the brave Jewish citizens, who slay themselves, rather than convert or die at the hands of the Christians: "They stretched forth their necks, so that their heads might be cut off for the Name of their creator...There were some of them that took their own lives." ...read more.

3This portrayed Christianity as the true path to salvation. Conversely, ideals of mainstream Christians changed during the Crusade. This is depicted in Gezort Tantu: "...here are the Jews...whose ancestors killed him and crucified him groundlessly... Let us take vengeance first upon them... Israel's name will be mentioned no more". 4However, not all Christians agreed with the horrific slaughter of the Jews. Albert of Aachen (Christian) describes the attacks as "Some error of mind"5. He further illustrates how brutal the 'Christians' actually were: "...Killed women...With their swords pierced tender children of whatever age and sex." 6 The violent tone questions the religious piety of the Christians, however the source concludes with "Or else let them be like us and acknowledge the son born of menstruation" 7- This brings about the idea of Sanctified violence, associated with Gregory VII, the idea of fighting for religious piousness. ...read more.

This created the stereotypical view of Jews being rich, which makes it problematic to believe the attacks were religiously motivated, but more so the greed of Elites in the Crusades. History claims Godfrey of Bouillon "extorted 500 silver pieces from the Jews of Mainz and Cologne in return for promises of protection he failed to fulfil"8. Even the religiously powerful extorted the Jews, by taking capital gain for protection i.e. Albert of Aachen wrote that the local archbishop (Rothard) of Mainz gave shelter to Jews after an "Incredible amount of money"9. The accounts of Albert, strengthen the idea, the attacks were for economic reasons. This can be seen when Albert writes "...A few because of fear, rather than because of love of the Christian faith, were baptized. With very great spoils taken from these people...continued on their way to Jerusalem. ...read more.