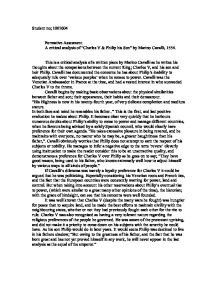 Student no; 1007604 Formative Assesment. A critical analysis of "Charles V & Philip his Son" by Marino Cavalli, 1554. This is a critical analysis of a written piece by Marino Cavalli as he writes his thoughts about the comparisons between the current King; Charles V, and his son and heir Philip. Cavalli has documented the concerns he has about Philip's inability to adequately rule over 'various peoples' when he comes to power. Cavalli was the Venetian Ambassador in France at the time, and had a vested interest in who succeeded Charles V to the throne. Cavalli begins by making basic observations about the physical similarities between father and son; their appearance, their habits and their demeanour. "His Highness is now in his twenty-fourth year, of very delicate complexion and medium stature. ...read more.

If Cavalli's dilemma was merely a loyalty preference for Charles V it could be argued that he was politicking. Especially considering his Venetian roots and French ties, and the fact that the European countries were constantly warring for power, land and control. But when taking into account his other reservations about Philip's eventual rise to power, (which were similar to a great many other opinions of the time), the historian; with the grace of hindsight, can see that his concerns were well founded. It was well known that Charles V (despite the many wars he fought) was hungrier for peace than to acquire land, and he made the best efforts to maintain civility with the neighbouring states, whether or not they had previously fought each other for the rite to rule. Charles V was also recognised as having a very tolerant nature regarding the religious preferences of the people he governed. ...read more.

And he was quite right, Philip did move to Spain never returning to live in Holland, he refused to speak the language and did keep virtually a wholly Spanish council. His preference for Spain was widely known at the time, and widely documented in the historical years to follow. This piece of text is written in a personal, almost diary or journal entry style which allows Cavalli to articulate freely his concerns. It would seem that Cavalli's fears were realised once Philip came to power, although there would have been nothing Cavalli could have done to bring about change, as Philip was born into the time when Royalty were believed to be born with a divine rite to rule, and due to the sheer population numbers of the countries that he resided over, he was always able to gain favour somewhere, especially when his main goal was to crush the protestant reformation and gain land and title, no matter what the cost. ...read more.