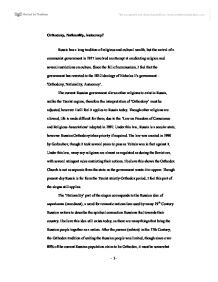 Orthodoxy, Nationality, Autocracy? Russia has a long tradition of religious and cultural wealth, but the arrival of a communist government in 1917 involved an attempt at eradicating religion and several restrictions on culture. Since the fall of communism, I feel that the government has reverted to the 1832 ideology of Nicholas I's government - 'Orthodoxy, Nationality, Autocracy'. The current Russian government allows other religions to exist in Russia, unlike the Tsarist regime, therefore the interpretation of 'Orthodoxy' must be adjusted, however I still feel it applies to Russia today. Though other religions are allowed, life is made difficult for them, due to the 'Law on Freedom of Conscience and Religious Associations' adopted in 1997. ...read more.

Though present-day Russia is far from the Tsarist strictly-Orthodox period, I feel this part of the slogan still applies. The 'Nationality' part of the slogan corresponds to the Russian idea of ????????? (narodnost), a word for romantic nationalism used by many 19th Century Russian writers to describe the spiritual connection Russians feel towards their country. I believe this idea still exists today, as there are many things that bring the Russian people together as a nation. After the ?????? (schism) in the 17th Century, the Orthodox tradition of uniting the Russian people was limited, though since over 80% of the current Russian population claim to be Orthodox, it must be somewhat unifying. ...read more.

Many people argue that Putin is still leading, especially as Medvedev, the current President, was Putin's Chief of Presidental Administration. No matter how much people believe Putin's government is autocratic, he is loved by his people. I believe, were a Presidential election held tomorrow, he would undoubtedly be voted back in, which would suggest that Russia is somewhat of a democracy. The debate on the Russian government rages on, though it can be argued that Russia is an autocracy, which fits with the slogan in discussion here. In conclusion, I believe the slogan 'Orthodoxy, Nationality, Autocracy' can be used to describe the attitudes and aims of the current Russian government. ...read more.