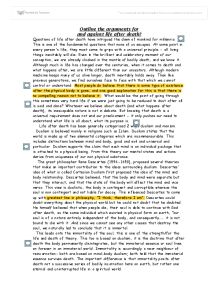 Outline the arguments for and against life after death?

Outline the arguments for and against life after death? Questions of life after death have intrigued the dawn of mankind for millennia. This is one of the fundamental questions that none of us escapes. At some point in every person's life, they must come to grips with a universal principle - all living things inevitably will die. Even in the brilliant and celebratory moment of our conception, we are already cloaked in the mantle of bodily death, and we know it. Although much in life has changed over the centuries, when it comes to death and what happens after, we are little different than our ancestors. Although modern medicine keeps many of us alive longer, death inevitably holds away. Then like previous generations, we find ourselves face to face with that which we cannot control or understand. Most people do believe that there is some type of existence after the physical body is gone, and one good explanation for this is that there is no compelling reason not to believe it. What would be the point of going through this sometimes very hard life if we were just going to be reduced to dust after all is said and done? Whatever we believe about death (and what happens after death), its inescapable nature is not in debate. But knowing that death is a universal requirement does not end our predicament - it only pushes our need to understand what life is all about, what its purpose is. Life after death has been generally categorised 2 ways dualism and monism. Dualism is believed mainly in religions such as Islam. ...read more.

It decide which past lives to pull into this one, it decides the lessons and karmic events it will work on, it can make an agreement with another soul(s) to join together in this coming life to resolve personal karma. All these issues are defined in a Master Plan (like a blue print) for this coming life. In the Hindu and Buddhist tradition the view is held that we have lived many lives before and that, on death, we will be reborn again. The conditions of our present lives are believed to be a direct consequence of our previous lives. Arguments for dualism Dualism has received a lot of attention in the past and Descartes has not been the only philosopher who has written on dualism. Great names such as Plato, Aristotle and Aquinas have all put forward their ideas on the subject each one differing slightly. Plato believed that the soul belonged to a level of reality that was higher of that of the body. He stated that the soul was immortal and this derived from his theory of ideas, which he called forms. For every existence there is a perfect idea/form: For every man there is an ideal man for every dog there is an ideal dog. A major argument in support for Dualism is the Argument from Religion. This argument comes from the ideas of ones religious belifs, which usually have a strong emphasis on the immortality of the soul. Another popular argument in support of Dualism is known as the, "arguments from Irreducibility", this argument simply supports the idea that thee is no physical explanation for things. ...read more.

The, "replica theory", states that if you were to die now, and were then recreated with the same memories and physical body in a different place on, Australia perhaps, rather than Britain you would not long doubt that it was the same you, even when you flew back to the UK to attend your own funeral. Similarly, if God were to re-create you in heaven after my death, as "a psycho-physical", being, (I.e. one with both a mind and body) This thesis has been one of the most intensely discussed theories of life after death put forward in our time. One criticism to resurrection, which was raised in the time of the church fathers and is still raised today, is , "what if a Christian dies at sea and his body is eaten by various sea creatures, who then scatter to the seven seas? How can God possibly resurrect that Christian? What the father typically did in response to this objection was to appeal to the divine nature. No human being would be able to locate and reconstitute the relevant atoms of the Christians body, but an all knowing and all powerful God could. Gods only problem is to locate, collect, and reassemble them, the church fathers were surly right. Such a being could do that. Arguments for monism These arguments will centre on physcalism. We as humans are just physical entities. We begin as a genetically programmed, monocular organisation of molecules. Development leads to behaviour controlling. Monism is the view that there is only one kind of, "stuff". This gives us two possibilities 1) All stuff is a physical stuff a position knows as physicalism. 2) All stuff is a mental stuff a position known as idealism. ...read more.

Aside from the fact that this essay stops abruptly just as it introduces monism, the standard is generally not bad.

To its credit, the essay covers a lot of diverse points drawing from a variety of thinkers and presents these, for the most part, accurately. The essay would be improved by including a clear structure. When writing under a title like "Outline the arguments for and against life after death" there is less need for a clear conclusion or argument, but there is still merit in setting out clearly what one is going to say, and trying to have something to say about the arguments in general, rather than just presenting a scattering of different views.

As it stands, the essay focuses exclusively on the division between monistic and dualistic ideas of life after death. This would be fine were the distinction clearly explained (just with some simple definitions at the beginning) and were it clear why this related to the task at hand. Instead, the essay seems like an essay on monism versus dualism, rather than an essay about arguments for life after death.

Though the essay title asks only for an 'outline' of the arguments for and against, the best marks will only be gained if some awareness is shown of the merits or demerits, of the arguments discussed. Also, as noted, the opening section which simply waxes lyrical about life and death can definitely be removed without subtracting anything important from the essay.