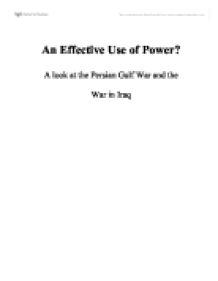 An Effective Use of Power? A look at the Persian Gulf War and the War in Iraq During the United States brief history, it has rarely been in a situation where it was directly threatened by a nation. This does not mean that it has not stepped in on plenty of conflicts though. As a super-power, and more recently a hegemonic power, the role of the United States has been to ensure the safety of not only its citizens, but of all human beings. In a more recent situation, the invasion of Kuwait was no exception to the responsibilities of the United States. What this paper discusses is whether the United States role in the Persian Gulf War was justified and that they did everything they could before relying on military action. International organizations have fought long and hard to develop international law focused on the law of war. Initially, these laws focused on the issues of traditional state-versus-state warfare. With the new age of warfare, international law must also attempt to regulate revolutionary and internal warfare and terrorism. In order to exemplify these diverse concerns, we must determine when a war is necessary and how it should be fought. This is when the "just war" theory comes into play. The "just war" theory consists of two parts: The cause of war and the conduct of war. It is mainly believed that the just cause of war (jus ad bellum) exists in cases where the war is declared by a legitimate authority, is a last resort, waged in self defense or to establish/restore justice, and fought to bring about peace. The reasoning for going to war in the first place needs to be just and can therefore be recapturing things taken or punishing people who have done wrong. The US Catholic Conference took a much more contemporary view of just cause when they stated that "force may be used only to correct a grave, public evil, i.e., aggression or massive violation of the basic human rights of whole populations" (Douglas, p.71). ...read more.

"Although the American-led coalition had the capabilities to do as it threatened, the Iraqi government apparently believed that it possessed the military muscle needed to neutralize any moves by the coalition"(Yetiv 2005, p.807). Thus, Iraq largely ignored the American threats made in the fall of 1990 and the winter of 1991. The UN and United States knew that if Iraq did not pull out after the economic sanctions had been enacted, which reportedly stopped all oil exports and reduced Iraqi imports by 90 percent, then Iraq would have to be moved by military force. Even after accepting this belief, the UN and all major powers worked up to the very last second in an attempt to avoid a war. George Bush made one last attempt at avoiding military use by overtly threatening Hussein. "A line has been drawn in the sand...Withdraw from Kuwait unconditionally and immediately, or face the terrible consequences"(Brands 2006, p. 24). The UN finally decided to impose a deadline of January 15, 1991 by which Iraq must comply with its demands. Once the deadline passed, it was clear that the region was poised for war and that the major nations of the world had to help protect the safety of Kuwait and its citizens. Seeing as the Iraq army was the fourth largest in the world, which was invading a country the size of Connecticut, it is clear that the United State's role in the war was to restore justice in a country that was clearly too small to protect itself, which further abided by the just war requirements. It seemed as though Hussein's motivation for invading Kuwait was based mainly on jealousy and hatred. Kuwait had a reputation of being arrogant, due to their record breaking wealth. Many Arab nations opposed the Kuwaiti practice of hiring other Arabs in order to do jobs they were not willing to do themselves. ...read more.

Once diplomatic efforts had failed, the coalition had received permission from the expert authority of the United Nations allowing the US to use force against the Iraqi army. Humanitarian intervention was also necessary as a result of the atrocities performed against the Kuwaiti civilians, which further solidifies the US case on a just war. Following the start of the war, the concentration had shifted from the justification for war over to the justice during the war. Iraq had once again failed to adhere to the just war principles. The Iraqi treatment of prisoners of war was far different from that of the coalition troops. The coalition continued following the requirements of just war behavior which allowed the killing of combatants regardless of the circumstances which brought them to bear (Woods, p.23). Lastly, the coalition did not participate in any individual assassination or nuclear war. This would have violated the exclusion of non-combatants from hostilities. During the entire Persian Gulf War, the coalition had followed the requirements for a just war long before and during the Persian Gulf War. After reviewing the steps necessary in determining whether a war is justified, it is clear that the United States abided by all these guidelines, and had been given no choice but to intervene on the matter. The actions of the United States during the Persian Gulf War were implemented perfectly (this is without looking beyond March 1991). It was the main responsibility of the hegemonic power to ensure that all human beings were being treated ethically. When Iraq invaded Kuwait, the United Nations sought the support of the United States in ensuring the safety of the Kuwaitis. With the recent war in Iraq, we have seen the importance of support from, not only a nation's citizens, but also the United Nations and other super-powers. President Bush ensured that the United States was acting based on the best interest of the United Nations during the Persian Gulf War, and it is hard to picture what he would have done if the invasion of Kuwait was ignored by the United Nations. ...read more.