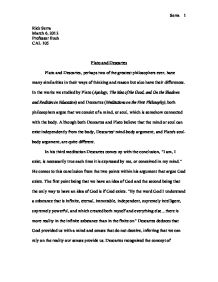 Plato and Descartes. In the works we studied by Plato (Apology, The Idea of the Good, and On the Shadows and Realities in Education) and Descartes (Meditations on the First Philosophy), both philosophers argue that we consist of a mind, or soul, which is

Rick Serra March 6, 2012 Professor Bush CAL 105 Plato and Descartes Plato and Descartes, perhaps two of the greatest philosophers ever, have many similarities in their ways of thinking and reason but also have their differences. In the works we studied by Plato (Apology, The Idea of the Good, and On the Shadows and Realities in Education) and Descartes (Meditations on the First Philosophy), both philosophers argue that we consist of a mind, or soul, which is somehow connected with the body. Although both Descartes and Plato believe that the mind or soul can exist independently from the body, Descartes' mind-body argument, and Plato's soul-body argument, are quite different. In his third meditation Descartes comes up with the conclusion, "I am, I exist, is necessarily true each time it is expressed by me, or conceived in my mind." He comes to this conclusion from the two points within his argument that argue God exists. ...read more.

Consequently it will lose all its specific properties, yet it is still known as wax. Descartes argues that in order to comprehend what wax is, you must be able to know it in all its forms and predict its changes. Descartes claims that the shapes and forms that the wax could take are infinite. This means, one can only distinguish what an object is by understanding, rather than through sense perception. "I readily discover that there is nothing more easily or clearly apprehended than my own mind." Plato and Descartes both agree that there is a need reach the highest good or attain deeper spirituality by looking for reasons. Just like Descartes, Plato believes that in order to reach the right conclusion, people have to travel from perception to reason and understanding. The things that we perceive are actually mere shadows of the walls. ...read more.

Plato views knowledge as something that can be derived from distinct set of principles. "Reason answering to the highest, understanding to the second, faith (or conviction) to the third, and perception of shadows to the last." Unlike Descartes in which the groundwork was built on one's self, Plato believed knowledge rests upon Good as its foundation. The beliefs of Plato and Descartes are similar yet also differ in many ways. According to Plato, we understand and see shadows and not the real things. According to Descartes, one must also find what makes and object unique through reason, but he does this with a slightly different method. He disbeliefs what he feels is not undeniable and reconstructs his foundation of knowledge with himself as the base. Plato is not trying to doubt anyone's views but instead trying to expand one's knowledge of it. Both Descartes and Plato have the same ends, to try and reach the Good or God, the only thing that is different, is their method of achieving their goal. ?? ?? ?? ?? 1 Serra ...read more.