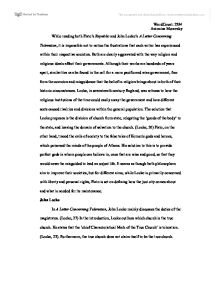 While reading both Plato's Republic and John Locke's A Letter Concerning Toleration, it is impossible not to notice the frustrations that each writer has experienced within their respective societies. Both are clearly aggravated with the way religion and religious ideals affect their governments. Although their works are hundreds of years apart, similarities can be found in the call for a more pacific and wise government, free from the coercion and misguidance that the belief in religion brings about in both of their historic circumstances. Locke, in seventeenth century England, was witness to how the religious institutions of the time could easily sway the government and how different sects caused rivalries and divisions within the general population. The solution that Locke proposes is the division of church from state, relegating the 'goods of the body' to the state, and leaving the domain of salvation to the church. (Locke, 26) Plato, on the other hand, traced the evils of society to the false tales of Homeric gods and heroes, which poisoned the minds of the people of Athens. His solution to this is to provide perfect gods in whom people can believe in, ones that are wise and good, so that they would never be misguided to lead an unjust life. It seems as though both philosophers aim to improve their societies, but for different aims; while Locke is primarily concerned with liberty and personal rights, Plato is set on defining how the just city comes about and what is needed for its maintenance. ...read more.

The Homeric gods are portrayed as having faults and as being spirited, often seen quarrelling with each other. (Plato, 381d-e) This causes people to be the same, because they try to imitate the gods. The solution to this problem lies in changing the gods so that they are perfect; able only to do good, and not evil. The goal is to change the admired attributes of the gods from spirited, to wise, so that others would aspire to be wise as well. If, for example, Socrates was the prototype of a god, instead of Achilles, then the city would be run much more peacefully. The process of making the gods perfect involves starting from the very beginning. According to Plato, all poets must depict gods as good, and nothing but. This includes making all stories that are told to children truthful. (Plato, 377c) Telling children the truth about the goodness of gods will point them towards the right path, just as not telling the guardians of the city about the quarrels that gods have will avoid the guardians fighting amongst themselves. (Plato, 386) These good beliefs about the gods will make the guardians respect and honour the gods, and will thus lead them to respect and honour their fellow guardians. (Plato, 377d-e) The belief in good gods will, in this way, bring about peace amongst the warrior class. ...read more.

(Plato, 415-417) In the perfect city, the guardians would rule and dictate for everybody else what is good, since they have the best conception of it based on their lifelong teachings of philosophy. In Conclusion Locke believes that religion should be relegated to a personal preference, instead of something that is compulsory and forced. In his view, true piety cannot be coerced, and thus should be something that an individual could choose if need be. The separation of church from state and the toleration between different churches is key to a working society and an effective and unbiased governmental system. Plato's experience of democracy lead him to believe that worshipping good gods and instilling the virtue of wisdom in the form of philosophy was the right path to the good city. Instead of rule by popularity and spiritedness, the old and wise would rule and dictate what is best and just in the good city. Although Plato and Locke share many differences in the way that they see religion as a challenge to the politics of their respective states, they are both concerned with the peaceful life that their proposed changes would bring to their communities. Their theories and views on the relationship between religion in politics have affected the modern world and have made it what it is today. Plato paved the way for communism and equality, while Locke drew an invaluable line between the spiritual domains of the church and the civil ones of the state. ...read more.