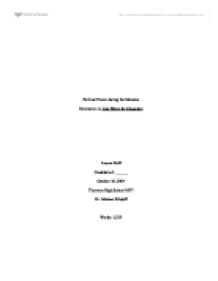 Political Power during the Mexican Revolution in 'Like Water for Chocolate'.

Political Power during the Mexican Revolution in Like Water for Chocolate Lauren Hoff Candidate #: ______ October 16, 2004 Thornton High School 0677 Dr. Michael Kilduff Words: 1,223 Throughout history, Mexico has had many revolutions. One of the most important revolutions would have to be the Revolution from 1910-1920. During this revolution, Mexico went through many dictators but eventually ended with a ruler who instilled rules and regulations that are still used today to run Mexico. Laura Esquivel's novel Like Water for Chocolate is an allegorical reference to the Mexican revolution. Each character in Like Water for Chocolate represents a different leader or dictator during the Revolution. The course of the book follows the rise and fall of the many different leaders. The six major characters within the novel, which are also the six major members of the De la Garza family; Mama Elena, Gertrudis, Rosaura, Tita, Pedro and Esperanza, all represent the different leaders and dictators to come to power during this decade. Minor characters such as John and Alex Brown, have reference to the relationship between the United States and Mexico during the revolution. ...read more.

From this Mama Elena sends her away saying, "Fine, if she is acting crazy, then I'm going to put her in an asylum". This gives Tita the chance to gain self-esteem in order to take over Mama Elena. After this out burst, Tita is picked up by John Brown, and instead of taking her to an asylum, he takes her in and cares for her. John Brown helps clean her up after her out burst, she beings to have an obsession with his hands because, "Those hands had rescued her from horror and she would never forget it" (Esquivel 108). During the Mexican Revolution, more than 900,000 Mexicans fled to the United States in order to discover a better life. The United States "went down into Mexico and saw what all the violence had done. They felt that they could not refuse Mexican immigrants wanting to have a better lifestyle" (Davies). John Brown is an allegorical reference to the United States, taking in Tita and caring for her, just as the United States had done for Mexican immigrants. Also, when Madero denounced Diaz as President, and wrote his revolutionary document, he was in the United States, taking refuge from Diaz's power. ...read more.

Rosaura began having "serious digestive problems, she suffered from flatulence and bad breathe" (Esquivel 169). These problems eventually lead to Rosaura's death, just as Huerta's problems lead to the end of his reign. When Huerta was overthrown, Venustantio Carranza became president. Carranza was the last leader to come to power during the Mexican Revolution, and he continued to rule until the current President of Mexico was elected. After Rosaura's death, Esperanza married Alex. Esperanza was the final woman in the De La Garza family, and she did not carry on the family tradition. Alex and Esperanza's marriage marks the end of the revolution. In the De la Garza family there are no longer battles over marriage or love. In Mexico, there are no longer battles between the revolutionists and Diaz's supporters over control. Alex, as well as John Brown, represents the United States. From the revolution, many Mexicans began migrating to Mexico, thus creating a bond between the United States and Mexico. All of the characters in Like Water for Chocolate represent a leader or dictator during the Mexican Revolution. Many men came to power during this war, causing many problems for Mexico. In the De La Garza family, the power of the fate of the family was passed around, causing many problems for members of the family. ...read more.