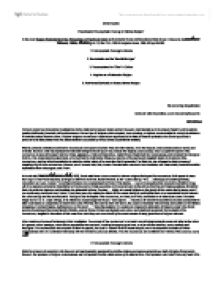 Mikhail Epstein Post-Atheism: from Apophatic Theology to "Minimal Religion" In the book: Russian Postmodernism: New Perspectives on Post-Soviet Culture (with Alexander Genis and Slobodanka Vladiv-Glover, in the series Studies in Slavic Literature, Culture, and Society, vol. 3). New York, Oxford: Berghahn Books, 1999, 528 pp.345-393. 1. From Apophatic Theology to Atheism 2. Secularization and the "New Middle Ages" 3. Theomorphism: the "Other" in Culture 4. Angelism as a Postmodern Religion 5. Post-Atheist Spirituality in Russia: Minimal Religion We are turning demystification inside out: within the profane, we are discovering the sacred. Mirca Eliade There are numerous philosophical investigations into the relationship between religion and art. However, what interests me in the present chapter is not the eternal question traditionally broached, but the phenomenon of a new type of religious consciousnessor, more precisely, a religious unconsciousthat is coming into existence in twentieth century Russian culture. The term 'religious unconscious' is applied here specifically to the state of Russian spirituality in the Soviet epoch and in particular to its latest phases when the official atheism is succeeded by various forms of post-atheist mentality. What is commonly understood by the term 'unconscious' is the sphere of primal drives and vital instincts, which the religious consciousness seeks to repress and eliminate. However, what was repressed and excluded during the Soviet epoch was precisely the religious consciousness, which occupied the sphere of the unconscious in place of the baser instincts of hate, aggression, cruelty and destruction, ousted from it, transformed into consciousness, and promoted into ideological doctrine. This unique historical experiment, which reversed the relationship of these two spheres of the psyche and relegated religion to the sphere of the unconscious, requires radical theoretization to match the radical nature of the revolution that it represents. The West, too, has witnessed a similar process of relegating religion to the unconscious. However, as will be seen later, this process of secularization was much more moderate, and it has already received theoretical explanations from a theological point of view. ...read more.

. . everything which has remained in the subsoil and the unconscious of the new history, must come to the surface." In the course of the Modern Age, extending from the Renaissance to the beginning of the twentieth century, the religious unconscious germinated, like a shadow cast by the gigantic effort of individual consciousness at self-liberation. Individuality has apparently achieved its ends, its 'human rights' are recognized, at least formally, in almost the entire world. But to the extent that individuality freed itself from the shackles of religiosity, religiosity has freed itself from the constraints of individualism, emerging in trans-human and non-individual forms. What should perhaps be the chief concern of the theology of the "New Middle Ages" is the assimilation of the religious meaning of alienation. Moreover, it should formulate the fundamental principles of a new dogmatics, issuing from the category of alienation. The old dogmatics had as its starting point the 'appropriation' of God by the human subject. That is, it humanized God, who was conceived as an intimate being close to humans. This is where the concept of kenosis originated, meaning the expending of the godly nature in Christ in the process of His becoming man and suffering an earthly fate. But the ascension of Christ, and more importantly, his 2000-year long absence as a man amongst men, cannot fail to generate a demand for new concepts, at the basis of which lies the alienation of the Divine from the human. This, then, is the religious meaning of the depopulated heavens: the Divine recedes into the distance, beyond the human. In its place arises a new religious sensibility, initially taken for atheism, which Sartre and Camus proclaimed to be the atheism of ultimate human liberation and despair. In actual fact, what we are facing is an extreme form of apophaticism, in which God appears as the radically Other, the Stranger, irrevocably distant from humans. ...read more.

The new paganism also features the cultivation of magic, extra-sensory perception, para-psychology, spiritism and other similar beliefs, which go back to the earliest animistic and fetishistic practices. Together with the return to traditional religion and the parallel immersion in pagan and Orthodox archaism, a third tendency can be observed in contemporary Russian religious life. To date, it has attracted the least attention because it tends to escape all forms of objectification. Its "minimality" almost precludes the formation of dogma or ritual and can be identified only as an internal impulse, a state of spirit, or a disposition of mind. This is what I call "poor" or "minimal" religion. For a Western observer, a more "recognizable" name for it would be religious modernism, universalism or ecumenicism, even if these terms do not exactly correspond to the Russian phenomenon. Imagine a young man from a typical Soviet family which, for two or three generations, was resolutely cut off from all religious traditions. Suddenly hearing a spiritual call in his soul, he cannot decide where to go in search of salvation. He tries the Othodox Church, the Catholic Church, the Jewish Synagogue, Baptist and Lutheran services. He finds historically shaped traditions of faith everywhere. Yet he is eager to experience spirit as whole and indivisible. Looking for faith he finds only different denominations. It is in this disparity between faith and beliefs that "minimal" religion emerges. It is a religion without an order of service, holy books, or specific rituals. It is notable that many more people are now abandoning atheism than joining specific denominations. These people can be characterized as "poor believers" who do not subscribe to any specific set of conventional religious practices. They belong to "religion" as such, without further definitions or qualifications. Their relationship to God is holistic, mirroring the wholeness and indivisibility of God Himself. Thus the religious revival in post-communist Russia is not only a renaissance of traditional beliefs, which were widespread before the atheistic revolution: it is also the naissance of a qualitatively new, post-atheist kind of spirituality. ...read more.