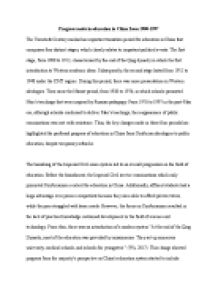 Transfer-Encoding: chunked ﻿Progress made in education in China from 1900-1997 The Twentieth Century marked an important transition period for education in China that comprises four distinct stages, which closely relates to important political events. The first stage, from 1900 to 1912, characterised by the end of the Qing dynasty in which the first introduction to Western academic ideas. Subsequently, the second stage lasted from 1912 to 1948 under the KMT regime. During this period, there was more presentation on Western ideologies. Then came the Maoist period, from 1938 to 1976, in which schools promoted Mao?s teachings that were inspired by Russian pedagogy. From 1976 to 1997 in the post-Mao era, although schools continued to deliver Mao?s teachings, the reappearance of public examinations was met with resistance. Thus, the key changes made in these four periods has highlighted the profound progress of education in China from Confucian ideologies to public education, despite temporary setbacks. The banishing of the Imperial Civil exam system led to an overall progression in the field of education. Before the banishment, the Imperial Civil service examinations which only promoted Confucianism centred the education in China. ...read more.

Nonetheless, most families found it impossible to pay for schools fees which made education scarce and only affordable to the wealthy ?the tuition fees for elementary school, much less middle or higher education, were within reach of the wealthiest minority in China.? (Nedostup, R., 2001). Furthermore, the majority of graduates were unwilling to work commonly known as ?attitude of entitlement? (Hong, 2001). Accordingly, this system shows that the public was not capable of affording education hence showed regression regarding availability. Mao?s policies and political movement overturned traditional norms, yet he used unqualified teachers and guiding ideologies as propaganda tools which excessively affected the student?s education. Likewise, Well-educated and wealthy individuals became targets, and Mao considered schools as one of his channel of propaganda. Shown in Da Chen?s novel China?s son, he wrote ?Mr Sun was bidding us a sad goodbye. He was heading to a re-education camp for teachers ?... a directive from the central government that from now on all schools would be governed by poor farmers?(Chen, 2001, p. 15). This policy indicated that the Communist Party sent qualified teachers to the re-education camp and the teaching quality had regressed. ...read more.

As a result, state-run schools experienced dramatic improvements and provided a primary education across China. Correspondingly, Deng removed the propaganda element that existed in Mao's curriculum, meaning Deng?s system judged more on student's merit than family lineage as in the past which motivated economic progression and innovation rather than filling senior official positions. Therefore, the education system at all levels became much more competitive. Overall, The post-Mao period was arguably the most important regarding reforming the Chinese education system because the availabilities of schooling and curriculum content made a stark improvement. In addition, the number of engineers produced reflected that this education reform played a fundamental role in providing qualified human capital. Today America produces only 60,000 to 70,000 engineers per year while China produces over 400,000 engineers per year(Carson, 2004). In conclusion, China?s education system made stupendous progress on public availability and ideologies from 1900-1997 despite temporary regression. Due to the unstable political and economic situation happened in China, which created a tremendous amount of restriction on knowledge and availability of schooling for students, this had a huge effect on student?s progress. Thence, the way that individuals comprehend and react to changes rely upon their background and viewpoint, which indicates different people respond differently to changes. ...read more.