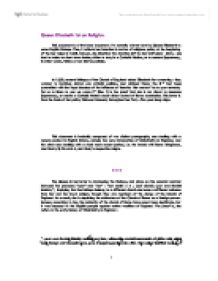 Queen Elizabeth 1st on Religion. This document is a first hand document : it's actually a letter sent by Queen Elisabeth to some English bishops. Thus, it reflects her intention in matter of religious policy at the beginning of the her reign in 1558. Indeed, she inherited the situation left by her half-sister Mary : she had to make an short-term choice, either to stay in a Catholic Nation, or to restore Supremacy, in other words, follow or not Mary's policies. In 1559, several bishops of the Church of England asked Elisabeth for a meeting : they wanted to Continue Mary's pro catholic policies, and claimed Henry the 8th had been quarrelled with the Pope because of the influence of heretics. Her answer "as to your entreaty for us to listen to you we wave it" (line 1) is the proof that she is not about to renounce Supremacy, or create a Catholic Nation under direct control of Rome domination. This letter is then the basis of her policy followed intensely throughout her forty-five year long reign. This document is basically composed of two distinct paragraphs, one dealing with a remote period in English history, namely the very introduction of Christianity in England, and the other one dealing with a much more recent period, i.e. ...read more.

These are tow foundations of the English church not founded at all thanks to the mission of St Augustine, but by the follower of Christ. Therefore, the Pope decision to establish Austin as archbishop of Canterbury was regarded as a real invasion for the primitive English Church : "Rome's usurped authority". If people accept this version of the foundation of the Church of England, it has a significant consequence ; in 1534, when the Act of Supremacy was drafted, it was just the return of a native tradition, that had previously been broken by the Church of Rome. Indeed, in every field at that time, it was important to prove your ideas and point of view was in keeping with tradition : if you want people to believe you are right in a debate you have to show you fallow a very old tradition. And, of course, this is what Elisabeth is playing on : supremacy was based on the primitive and native tradition of the English Church. The question of Rome authority, and more precisely the question of the Pope's authority, was highly criticized by Luther. It was indeed a matter of debate on continent in the quarrel between protestant and Catholics. We can discern in Elisabeth's written reply, a real disagreement. ...read more.

However, the bishops themselves were already members of the clergy under her father's reign and supported supremacy, or at least didn't go against its principles ; which was her reply. Then she addresses those bishops directly, pointing them out, revealing that the reason they previously accepted supremacy is the simple fact that supremacy didn't mean the introduction of Protestantism, but a return to the primitive and native tradition. Thus, very subtly, she is demonstrating them they are in real contradiction with themselves. * * * Therefore, according to this official version, going to become the founding myth of the Church of England, there were continuity between the reigns of Henry and Edward ; a continuity of a preservation of primitive tradition, broken by Mary and her catholic policy. Her message is then the exact opposite of what the bishops were excepting : she highly wants to restore this continuity, with tradition as a keyword. Thus, the importance of this document is that it is one of the very first official stage of this particular traditional myth : Thanks to supremacy and its protestant identity, the Church of England preserved all the oldest primitive traditions and the true Christian faith. This created the conditions for the emergence of a distinctive religious identity neither Catholic, nor Protestant but Anglican. 1 ...read more.