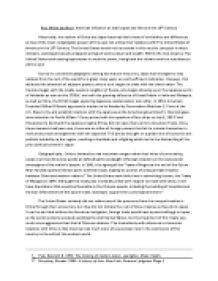 Red, White, and Blue: American Influence on Japan and China in the 19th Century

﻿Red, White and Blue: American Influence on both Japan and China in the 19th Century Historically, the nations of China and Japan have had their share of similarities and differences as two of the most recognizable powers of the east; not unlike their relations with The United States of America in the 19th Century. The United States would not be undone in this race for conquest in these domains, seeking previously untapped springs of exotic power and wealth. Within the two empires, The United States took varying approaches to seek this power, being both the initiator and the subsidiary as will be seen. Due to its convenient geographic setting and natural resources, Japan had managed to stay isolated from the rest of the world for a great many years as a self-sufficient civilization. ...read more.

In 1852, American President Millard Fillmore approved a mission to be headed by Commodore Matthew C. Perry of the U.S. Navy to try and establish relations with the Japanese as the American government?s interests gave more attention to Pacific Affairs.1 Perry arrived with his squadron of four ships on July 8, 18531 and threatened to bombard the Japanese Capital if they did not open their ports to American Trade. Once, these demands had been met, there was an influx of foreign powers that felt to include themselves in involuntary trade arrangements with the Japanese. This period brought on a great time of economic and political instability to the region, resulting in backlash and infighting which led to the dismantling of the prior political scheme in Japan. ...read more.

Although this treaty was incredibly unfair with respect to trade with China, it did have stipulations that would be favorable to the Chinese people, including the building of hospitals and the ban enforcement of the opium trade, looking to support the current government.2 The United States certainly did not relieve any of the pressures from the unequal treaties in China through their encounters, but they did not initiate the rush of those treaties as they did in Japan. It can be said that without the American instigation, foreign trade would have opened willingly in Japan as the world economy evolved; avoiding the detrimental fallout, but the treatment of this treaty was much more aggressive than that of Chinese relations. The dissimilarity with reference to American relations with China is that America took much more of a secondary role in the submission of this country to the wills of the western world. ...read more.