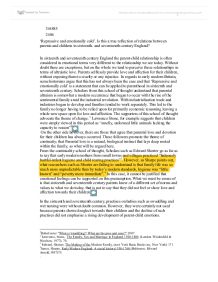 'Repressive and emotionally cold'. Is this a true reflection of relations between parents and children in sixteenth- and seventeenth-century England?

344885 2486 'Repressive and emotionally cold'. Is this a true reflection of relations between parents and children in sixteenth- and seventeenth-century England? In sixteenth and seventeenth century England the parent-child relationship is often considered in emotional terms very different to the relationship we see today. Without doubt there are exceptions, but on the whole we tend to perceive these relationships in terms of altruistic love. Parents selflessly provide love and affection for their children, without exposing them to cruelty or any injustice. In regards to early modern Britain, some historians argue that this has not always been the case and that 'Repressive and emotionally cold' is a statement that can be applied to parenthood in sixteenth and seventeenth century. Scholars from this school of thought understand that parental altruism is somewhat a modern occurrence that began to occur with the rise of the sentimental family amid the industrial revolution. With industrialisation trade and industries began to develop and families tended to work separately. This led to the family no longer having to be relied upon for primarily economic reasoning leaving a whole new space open for love and affection. The supporters of this school of thought advocate the theme of change. 1 Lawrence Stone, for example suggests that children were simply viewed in this period as "smelly, unformed little animals lacking the capacity to reason"2. On the other side however, there are those that agree that parental love and devotion for their children has always occurred. These followers promote the theme of continuity; that Parental love is a natural, biological instinct that lays deep rooted within the family, as what will be argued here. ...read more.

Stone goes on to explain that because of the infant mortality rate, if an infant was to die, then generally the family did not suffer a great loss emotionally as parents "reduced the amount of motional capital available for prudent investment in any single individual, especially in such ephemeral creatures as infants."19 The sixteenth and seventeenth centuries were, no doubt times of obscurity and uncertainty in regards to death, especially death of infants, therefore in all logic it makes a lot of sense to suppose that child death did not mean a great deal to parents. However, diaries and much popular literature at the time tell a completely different story. As Pollock suggests, the high infant mortality rate actually heightened parents concern in times of illness and parents were "grief-stricken at the death of a child"20. When Ralph Jossellin's daughter became ill he wrote in his diary "My little daughter ill with wormes, I hope that mercy that gave her and hath hitherto preserved her will continue restore her and sanctify her21". Eight year old Richard Evlyn, died on the 27th January 1658, his father wrote of him in his diary "He was all life of prettinesse', far from morose or sullen or childishness in anything he said or did...Such a child I never saw; for such a child I bless God, in whom bosom...Here end the joy of all my life, and to which I go even morning to the grave."22 Houlbrooke, like Stone, basing his evidence on the infant mortality rate agrees that an infant death caused much bereavement to parents, but he also points out that as a baby the level of grief probably was not that ...read more.

This essay covers a reasonable range of content and makes some good arguments. The student could set the examples used in a wider context and make links to other topics. The structure could also be improved.
4 stars.