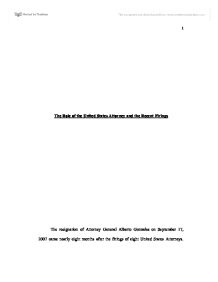 Resignation of US Attorney's

On December 7, 2006, seven of the Untied States Attorneys were fired without cause or justification. Alberto Gonzales, the former Attorney General, gave no reason whatsoever as to why these seven, all of whom had been appointed by George W. Bush, were asked to resign quietly. A year prior, two other United States Attorneys were dismissed under similar circumstances. These firings and the tight lips of the Department of Justice have caused an up-roar in the judicial and political community of the United States. This controversy has been labeled as purely political and Congress has taken the initiative to let the Executive Branch know that their discrete actions are unacceptable. The Senate Judiciary Committed launched an investigation, and subpoenaed a number of the Attorney General's staff. Several e-mails were produced that detailed the desire to fire several U.S. Attorneys as early as March 2005. There are reports that Kyle Sampson, a former staff member for Alberto Gonzales, created a criterion by which to grade U.S. Attorneys on their performance.7 However, the criterion seemed to weigh political views and affiliations just as importantly as job performance. Other statements and e-mails have been brought to light that have reiterated this political point. ...read more.