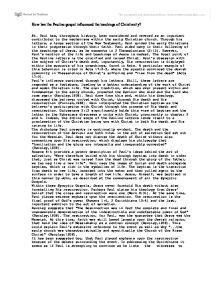 St. Paul has, throughout history, been considered and revered as an important contributor to the mechanisms within the early Christian church.

St. Paul has, throughout history, been considered and revered as an important contributor to the mechanisms within the early Christian church. Through his letters, a large section of the New Testament, Paul guided the early Christians in their progression through their faith. Paul aided many in their following of the teachings of Jesus, as he comments in 2 Thessalonians (2:15). However, Paul's mention of the life and teachings of Jesus is modest. The focal point of the Pauline letters is the crucified and raised Christ. Paul's obsession with the subject of Christ's death and, importantly, His resurrection is displayed within the accounts of his preachings, found in Acts. A particular example of this behaviour is cited in Acts 17:2-3, where the apostle convinced the Jewish community in Thessalonica of Christ's suffering and "rise from the dead" (Acts 17:3). Paul's influence continued through his letters. Still, these letters are regarded as a footstone, leading to a better understanding of the work of Christ and model Christian life. The oral tradition, which was ever present within and fundamental to the early church, promoted the Saviour who died and the Lord who rose again (Barclay,1958). Paul drew from this and, within his theology, discussed the believer united with Christ, through His death and His resurrection (Furnish,1968). Paul interpreted the Christian baptism as the believer's participation with Christ through the process of His death and resurrection. ...read more.

This could explain Paul's extensive reference to the event as well as why "...the early church was characteristically and specifically the Church of the Risen Christ" (Barclay,1958). It has been suggested too, that Paul placed emphasis upon the resurrection because of the debate surrounding the event. In addressing the Corinthians it seems as if Paul is attempting to convince as he lists the witnesses to the resurrection (1 Corinthians 15:5-8). Paul's letters are the earliest literary account of the resurrection and the earliest evaluation of the resurrection being a redemptive act, which overcomes sin and death together (Dewar,1986). Paul's discussion of the resurrection, therefore, is of great value "...since Paul includes his own experience" (Evans,1970), as he was an eye witness to the event. This is obviously an influential factor in the early church's acceptance of Paul's theology upon the resurrection and the reason for it being "...adopted as the unchallenged centre of their hope" (Dewar,1986). For Paul, the belief in the resurrection was the most necessary statement within Christianity. References to the resurrection are abundant within the Pauline letters due to it's overwhelming significance for Paul. The resurrection and the church's belief in it was an essential component of the first creed (Barclay,1958; Romans 10:9; 1 Thessalonians 4:14). A Christian's profession of faith rests largely upon the belief that Jesus died and rose again (Stanley,1961). ...read more.

The resurrection contributes to many aspects of Christianity, one in particular being the union with Christ. Paul highlights that the believer becomes one with Christ through his baptism and Paul sees the baptism as a re-enactment of the resurrection. Paul signifies the importance of the resurrection within the faith of the Church, the most memorable occurrence can be found in chapter 15 of 1 Corinthians. In this chapter, Paul discusses the four truths: i Truth is stronger than falsehood ii Good is stronger than evil iii Life is stronger than death iv Love is stronger than hatred The resurrection is the key to the depiction and display of these truths. For Paul, the resurrection lies at the heart of his faith, as it is the eradication of sin and the fulfillment of all that was promised. Paul explains this by naming Jesus as "the last Adam" (Corinthians 15:45). Adam represented man's bringing sin into the world and Jesus is the representation of God's destruction of sin. Paul writes, For as in Adam all die, so in Christ all will be made alive". Death is greatly relevant, as it is doubled with the resurrection in order to achieve salvation. However, the resurrection is the final step to the achievement of God's earthly work. With the resurrection, in accordance with Isaiah's prophecy, "Death has been swallowed up in victory" (Isaiah 25). How has the Pauline gospel influenced the teachings of Christianity? ...read more.