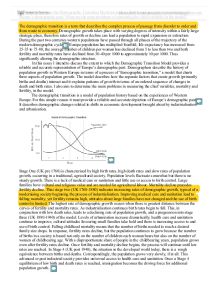 T o what extent does the Demographic Transition Model provide a reliable and accurate representation of Europe's demographic past? What are the main problems of measuring the chief variables in the model?

T o what extent does the Demographic Transition Model provide a reliable and accurate representation of Europe's demographic past? What are the main problems of measuring the chief variables in the model? The demographic transition is a term that describes the complex process of passage from disorder to order and from waste to economy. Demographic growth takes place with varying degrees of intensity within a fairly large strategic place, therefore rates of growth or decline can lead a population to rapid expansion or extinction. During the past two centuries western populations have passed through all phases of the trajectory of the modern demographic cycle. In Europe population has multiplied fourfold, life expectancy has increased from 25-35 to 75-80, the average number of children per woman has declined from 5 to less than two and both fertility and mortality rates have declined from 30-40 per 1000 to approximately 10 per 1000. Thus significantly altering the demographic structure. In this essay I intend to discuss the extent to which the Demographic Transition Model provides a reliable and accurate representation of Europe's demographic past. Demographers describe the history of population growth in Western Europe in terms of a process of "demographic transition," a model that charts three aspects of population growth. The model describes how the separate factors that create growth (primarily births and deaths) interact and it explains patterns of growth in terms of an ordered sequence of changes in death and birth rates. I also aim to determine the main problems in measuring the chief variables, mortality and fertility, in the model. The demographic transition is a model of population history based on the experiences of Western Europe. For this simple reason it must provide a reliable and accurate depiction of Europe's demographic past. It describes demographic changes related to shifts in economic development brought about by industrialisation and urbanisation. Stage One (UK pre 1760) ...read more.

Causes of mortality declines during the period of the Industrial Revolution resulted from biological, economic or social changes. The reduced frequency and intensity of epidemic cycles and disappearance of the plague were key factors. Due to better economic organization, agricultural progress and improved transportation, thus distribution of goods, the incidence of famine was reduced. Socio cultural practices helped to reduce the spread of infectious diseases and improve survival rates, especially those of infants. Improved social conditions, public and private hygiene, reduced the transmissibility of infection. Medicine before the 1750's wasn't well developed. Once infection set in, nothing was possible to save the patient. Various diseases couldn't be stopped or controlled because of limited technology. During the process of industrialisation however, progress was made in the control of infectious diseases. Vaccinations were discovered and administered. Jefferson's discovery of the smallpox vaccine in 1798, and the identification of pathogens responsible for the most devastating epidemics, considerably aided the process of mortality decline. X rays were also discovered and provided doctors with a faster way of diagnosing medical problems. Louis Pasteur discovered and fabricated a way to eliminate all germs in milk. Called pasteurisation, this technique involving heating the milk to slow the fermentation process, is now widely used on all milk. Mortality declined because of a decline in the probability of death at the various ages during normal periods, therefore life expectancy lengthened. In Europe mortality transition was relatively slow, the median date for European countries to reach a female life expectancy of 50 was 1903. Fertility decline in Europe followed mortality decline, thus matching the pattern of the Demographic Transition model. Fertility decline, like that of mortality, was a gradual and geographically varied process. Prior to transition European levels ranged from a low of about 30 per thousand to a high above 45, present crude birth rates for the United Kingdom stand at 12 per thousand. ...read more.

Remoteness also poses a threat. Remote and inaccessible areas with poor communications and transport links are difficult to accurately survey in order to obtain data relating to birth rate and death rate. Previous estimates of early population size have poor reliability. Historical knowledge from partial censuses, parish registers, nominative lists for certain places and archaeological findings can give us clues to the possible historical population trends. The 'back projection' technique aims to estimate the number of people in the oldest closed age group as movement back in time occurs, and is used to estimate population size, migration, age distribution, fertility and mortality. However it has been proved that this technique cannot be used to reliably estimate the above factors. The trend of population in history is no more than a convenient method of summarizing the experience of a society in time. The demographic transition and associated migration left European population profoundly changed, both dynamically and structurally. Although the Demographic Transition Model reflects the demographic changes in Europe, demographic change has not been free of crisis or disorder. French Revolution and Napoleonic wars devastated Europe for 20 years and in 1816-17 famine accompanied by an outbreak of typhus affected demographical change. The accuracy and reliability of these conclusions about Europe's demographic past is determined entirely by the reliability of historical data. Statistical data from too few places, for too short a time and with too few cases is of little value to the demographer. To conclude, from the data sources I have analysed, I am of the opinion that the Demographic Transition model provides a simplified, reliable and accurate depiction of Europe's demographic past. C. McEvedy & R. Jones (1979) Atlas of World Population History (MP 117) W. Thompson (1945) Population American Jnl Sociology May 959-975 - online M. Livi-Bacci (1997) A Concise History of World Population 2nd Edition E.A. Wrigley Population and History T.H Hollingsworth Historical Demography E.A Wrigley & R.S. Schofield (1983) English population history from family reconstruction Population Studies 37 154-184 -online R. Lee (1985) Inverse projection and back projection Population Studies 39 233-248 - online ...read more.

This essay gives a good account and overview of the demographic transition model. The structure and language are also appropriate. The detailed analysis of Wrigley and Schofield's work is, however, flawed, and the student fails to appreciate the implications it has for the demographic transition model more generally. The essay would be considerably improved by dealing with these issues more fully. 4 stars.