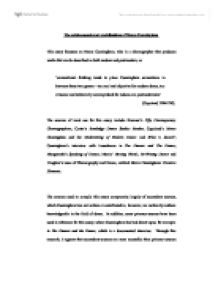 The achievements and contributions of Merce Cunningham

The achievements and contributions of Merce Cunningham This essay focusses on Merce Cunningham, who is a choreographer that produces works that can be described as both modern and postmodern, as 'conventional thinking tends to place Cunningham somewhere in between these two genres - too cool and objective for modern dance, too virtuosic and technically accomplished for Judson-era postmodernism' (Copeland, 2004:230). The sources of most use for this essay include Bremser's Fifty Contemporary Choreographers; Carter's Routledge Dance Studies Reader; Copeland's Merce Cunningham and the Modernizing of Modern Dance and What is dance?; Cunningham's interview with Lesschaeve in The Dancer and The Dance; Morgenroth's Speaking of Dance; Morris' Moving Words, Re-Writing Dance and Vaughan's issue of Choreography and Dance, entitled Merce Cunningham: Creative Elements. The sources used to compile this essay compromise largely of secondary sources, which Cunningham has not written or contributed to, however, are written by authors knowledgeable in the field of dance. In addition, some primary sources have been used in reference for this essay, where Cunningham has had direct input, for example in The Dancer and the Dance, which is a documented interview. Through this research, it appears that secondary sources are more accessible than primary sources on this choreographer, giving diverse accounts, but all appearing to be consistent with the information given. To achieve the aim of exploring Cunningham's achievements and contributions in relation to dance, this essay will discuss three main contributions and two main achievements. The contributions looked at are that of Cunningham being a choreographer, a teacher and an advocate for dance and the achievements explored are that of his discoveries within dance (chance methods and computer composition) ...read more.

He also opens up the space 'to consider it equal' (Lesschaeve in Carter, 1998:29), which he drew from Einstein's quote of 'there are no fixed points in space' (Einstein in Lesschaeve in Carter, 1998:29). Moreover, he chose to break away from having a meaning behind the dance and 'every collaborative element maintains its autonomy. The choreography, the score, the settings are all created in isolation and often don't encounter one another until the very first performance' (Copeland, 1983:312). These are all characteristics of Modern dance, so here it is already clear that Cunningham was (and is still) constantly striving for something new to bring to the world of dance, which can be described as a contribution. A contributing factor behind Cunningham's choice to remove all narrative form in his work was through his work with Martha Graham. 'In 1939...Cunningham was invited to join the Graham Company...and remained with the company until the mid-forties' (Kostelanetz, 1992:1). Through closely working with Graham, he experienced her choreography first hand, which is described as expressive and very much about emotion; it 'is based on introspection while Cunningham's originates from a kind of anti-introspection which produces abstraction' (Morris, 1996:280). Cunningham then went on to reject Graham's ways of thinking, and in the process, 'introduced a new concept of expressivity to dance' (Morris, 1996:278). This new way of thinking led to Cunningham being 'the first choreographer to achieve (or even attempt to achieve) the aims of the Russian Formalist Victor Shklovsky...who wrote that art is the effort to "remove the automatism of perception, to increase the difficulty and length of perception"' (Copeland, 1983:314). ...read more.

and this is clearly portrayed in Cunningham's work. I also find it fascinating that one can dance purely because they want to and it does not have to convey a meaning. This has had the biggest impact on me, as I was brought up that dance always had to have a meaning. For this reason, Cunningham has influenced the work I produce when I choreograph. I often feel constrained when given a theme or a set idea to build upon and always feel much more free when allowed to just see where the movement takes me or to improvise. In addition, I have used some of Cunningham's chance methods in my work, such as the rolling of a die, and can fully appreciate the idea within this choreographic method. Cunningham once said, 'The point is that dance need not to refer to something else. It is what it is' (Cunningham in Schiphorst in Vaughan, 1997:80). I think this quote sums up Cunningham's work, and it has inspired me to think that dance can simply be dance because you want to. For this reason, I believe my work has become less restrictive and I urge others to use this freedom of expression in their ways of thinking and choreographing. Finally, to conclude, Cunningham has given to dance his individuality. With chance and computer composition, controversial musical accompaniment and scenic design and with his invention of steps to now be acclaimed as the Cunningham style, he has shown he is able to push the boundaries of dance, to constantly look for new ways to do this and for dance to be continually accepted as a way of simply dancing because you want to. ...read more.