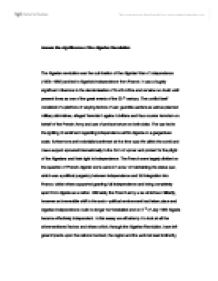 The Algerian revolution was the culmination of the Algerian War of Independence (19541962) and led to Algeria's independence from France. It was a hugely significant milestone in the decolonisation of North Africa.

Assess the significance of the Algerian Revolution

The Algerian revolution was the culmination of the Algerian War of Independence (1954–1962) and led to Algeria's independence from France. It was a hugely significant milestone in the decolonisation of North Africa and remains no doubt until present times as one of the great events of the 20th century. The conflict itself consisted of a plethora of varying factors of war; guerrilla warfare as well as planned military skirmishes, alleged ‘terrorism’ against civilians and thus counter terrorism on behalf of the French Army and use of profuse torture on both sides. The war led to the igniting of sentiment regarding independence within Algeria on a gargantuan scale, furthermore anti-colonialist sentiment at the time was rife within the world and mass support sprouted internationally in the form of uproar and protest for the plight of the Algerians and their right to independence. The French were largely divided on the question of ‘French Algeria’ some were in favour of maintaining the status quo, which was a political purgatory between independence and full integration into France, whilst others supported granting full independence and being completely apart from Algeria as a nation. Ultimately the French army was victorious militarily, however an irreversible shift in the socio-political environment had taken place and Algerian independence could no longer be forestalled and on 5th of July 1962 Algeria became effectively independent. In this essay we will attempt to look at all the aforementioned factors and others which, through the Algerian Revolution, have left great impacts upon the nations involved, the region and the world at least indirectly, it is through this that we shall than be able to derive the significance of the Algerian Revolution.

One of the most resounding elements of the entire conflict within the region was the extent and ferocity of the violence which took place. The battles, massacres and stories of torture still set a precedent for the humanitarian atrocities which have been afflicted in times of war and has ‘echoed’ on to mar the pasts’ of both sides of the battle, as well as hindering relations between the two nations until today. The FLN adopted tactics similar to those of nationalist groups in Asia; tactics such as rallying of the peasantry amongst others may have initially been over-looked by the French. A momentous watershed in the War of Independence was the massacre of Pieds-Noirs civilians by the FLN near the town of Philippeville in August 1955. Before this operation, FLN policy was seemingly to attack only military and government-related targets. The commander of the region it seemed had decided a drastic escalation was needed. The killing by the FLN and its supporters of 123 people of whom 71 were French[1], including old women and babies. The government claimed it killed 1,273 guerrillas in retaliation; however both the FLN and other impartial sources estimate 12,000 Algerians were massacred by the armed forces and police, as well as Pieds-Noirs gangs[2]. The repression was an early cause of the Algerian population's rallying to the FLN. After Philippeville, sterner measures were declared and an ‘all-out’ war was said to have begun. The Philippeville massacre was but one event, and the war produced no shortage of grim statistics for the history books. To seize French attention and funnel it to their struggle, the FLN decided to divert the conflict to the cities and to call a nationwide general strike to attack the infrastructure and economy of the French-run state[3]. The most notable manifestation of this new urban campaign was the Battle of Algiers, which began on September 30, 1956, when three women placed bombs at sites strongly linked to the French Republic. The FLN carried out an average of 800 shootings and bombings per month through the spring of 1957, resulting in many civilian casualties and inviting a crushing response from the authorities[4]. From its origins in 1954 as a sporadic force numbering in the hundreds and armed with a makeshift assortment of hunting rifles and discarded European light weapons, the FLN had evolved by 1957 into a disciplined fighting force of 40,000[5]. During 1956 and 1957, the FLN successfully applied tactics in accordance with guerrilla warfare theory learnt from Asia, and in particular Maoist China. Some of this was aimed at military targets; a significant amount was diverted into a terror campaign against those deemed in any way to be supporting, encouraging or simply not opposing French authority[6]. This resulted in acts of sadistic torture and violence against even women and children. Through ambushes, night raids and avoiding direct contact with the sizeable French firepower, the FLN targeted army patrols, military encampments, police posts, and colonial farms, mines, and factories, as well as transportation and communications facilities[7]. Initially, the FLN targeted only Muslim officials of the colonial regime this later later shifted and they coerced, maimed or killed village elders, government employees, and even simple peasants who simply refused to support them. Within two years of the conflict, the guerrillas are said to have killed roughly 6,000 Muslims and 1,000 non-Muslims[8]. In addition to all of this the French army recruited and trained bands of loyal Muslim irregulars, known as the harkis. They were armed and employed guerrilla tactics similar to those of the FLN. They went on to number about 180,000 volunteers, even more than the FLN ‘members’[9]. This led to a battle which involved Algerians killing Algerians and the sowing of seeds which would lead to a deeply-rooted hatred which exists until today in the ghettos of France.

We have seen the significance of the Algerian revolution from a humanitarian angle and its prominence as one of the ‘bloodiest’ conflicts in modern history, however this does not mean to say that the conflict did not raise many socio-political issues of which some remain unaddressed even today. The conflict led to a feeling of instability regarding the French Fourth Republic and increased the sentiments of the army and of the pied-noirs that the security of Algeria was being undermined by party politics. The feeling was widespread that a repetition of the ‘mess’ of Indochina in 1954 was in the making and that the government would order another pullout at the cost of French honor[10]. Many saw in de Gaulle, who had not held office since 1946, the only public figure capable of rallying the nation and giving direction to the French government. By early 1958, there had been organised a coup d'état, of dissident army officers and pied-noirs with sympathetic Gaullists. This led to the so-called ‘May Crisis’ and the reinstatement of Charles de Gaulle as the French Head of state with emergency powers to retain Algeria. Further upheaval came in the form of mass exodus from Algeria. In 1959, the pieds-noirs numbered 1,025,000 and accounted for 10.4% of the total population of Algeria[11]. In just a few months in 1962, 900,000 of them fled or left the country. The FLN motto at the time was "Suitcase or coffin". In 1962, around 91,000 Harkis fled or sailed to France, despite French policy against this[12]. The Harkis were seen as traitors by many Algerians, and many of those who stayed behind suffered severe reprisals after independence. The abandonment of the "Harkis" both in terms of non-recognition of those who died defending a French Algeria and the neglect of those who escaped to France, remains an issue that France has not fully resolved although have attempted to afford them with recognition to some degree.

Estimates range around 1.5 million dead and 2 million uprooted by the war, we have seen not only did these people die but many also suffered great torture and torment. Whilst there are many facets of the significance of this war, the real two over-arching issues are the sheer scale of violence and ruthlessness displayed by both side. The second is the political and social upheaval it caused by shaking the French government and leading to a revised constitution as well as the migration of large numbers of inhabitants of Algeria to France and indeed elsewhere in the world. Both these factors are essentially part of the shaking disturbance which the revolution caused and whilst there are claims that it led to an important milestone in the history of colonial Africa and its huge impact upon social structures within Algeria, the defining element which makes the Algerian Revolution hugely significant is the sheer ‘shake-up’ it caused and still causes upon Algeria, France and the field of politics as a whole. Governments and publics are still swayed by the events of the Battle of Independence and its shock factor is what has perpetuated it and kept it current, important and therefore significant.

Leulliette, Pierre, St. Michael and the Dragon: Memoirs of a Paratrooper, Houghton Mifflin, 1964

COLONIALISM THROUGH THE SCHOOL BOOKS - The hidden history of the Algerian war, Le Monde diplomatique, April 2001

Mouloud Feraoun, entries for 1959 from his Journal, 1955‐62: Reflections on the French‐Algerian war (tr. Mary Ellen Wolf and Claude Fouillade, Lincoln, Nebraska UP, 2000)

[8] Leulliette, Pierre, St. Michael and the Dragon: Memoirs of a Paratrooper, Houghton Mifflin, 1964

[12] COLONIALISM THROUGH THE SCHOOL BOOKS - The hidden history of the Algerian war, Le Monde diplomatique, April 2001