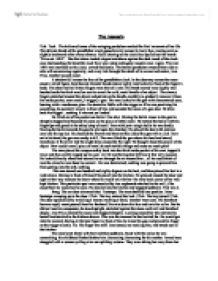 Tick. Tock.  The hollowed tones of the swinging pendulum marked the final moments of her life. The delicate hands of the grandfather clock passed slowly across its ivory face, moving ever so slightly backwards after every advance. Gold lettering on the clock face spelled out the words “Price est. 1892”.  The thin letters looked elegant and shone against the dark wood of the clock case. Surrounding the beautiful clock face was a deep mahogany wooden case. Again, Price est. 1892 was inscribed on the clock, carved faultlessly. The bronze pendulum swayed from side to side with unwavering regularity, and every tick brought the death of its owner and maker, Jane Price, another second closer.

A shadow fell across the face of the grandfather clock. In the doorway across the room stood a veiled figure, head bowed. Slender hands rested, lightly interlocked in front of the figure’s body. The short and nail-bitten fingers were that of a man. His hands moved very slightly and brushed aside his thick woollen coat to reveal the cold, metal handle of an object.  The sinewy fingers stretched around the object and pulled on the handle carefully to gradually remove it from his inside pocket; more metal; a trigger; a gun. The man looked at the gun with concentrated eyes, burning with a murderous glare. He started to fiddle with the trigger as if he was practicing for something; he pointed it slowly in front of him and sounded the noise of a gun shot. He drew back the trigger…nothing. It was not yet loaded.

He lifted out of his pocket one bullet. One shot. Raising the bullet closer to the gun he abruptly stopped and focused his eyes on the piece of lethal metal. He rotated the bullet with his fingertips and gazed at the shiny lump of metal. Even with just a single bullet he was deadly. Moving the bullet towards his gun he slid open the chamber. He placed the shot with extreme care into the top slot. He checked the firearm and then swiftly closed the gun with a click. Now sat in his hand, the gun was ready to kill. The man lifted the gun above his head and stared, transfixed, at the silver and the slight shine caused by the light. He thought about the power of the object. How could a small piece of metal do such terrible things and cause so much pain?

The man placed his weapon safely back into the thick inside pocket of his coat, tapped it twice and then swiftly zipped up his coat. All life and feeling had left him at this very moment. He looked directly ahead and seemed to see through the air around him…all he could think of was the crime he was about to commit.. He was determined; nothing was going to prevent him from getting into the safe, nothing.

The man turned one hundred and eighty degrees on his heel, and then placed his feet in a wide stance. Staring in front of himself he paced into the kitchen. He glanced around the door and right at that very moment he knew where he would wait for her: the very back corner of her well-kept kitchen. This particular spot was concealed by two cupboards attached to the wall; if he stood there he would not be seen. He strolled into the kitchen and stopped suddenly. This was it.

Bang. The car door slammed shut. Footsteps. The man shuffled into position. More footsteps creeping up to the door. Click. The key entered the lock. Click. The key turned. Click. The door opened slowly revealing a woman wearing a black, weather-worn coat. His heartbeat became rapid, sweat poured from his forehead like rain down his face and onto his collar. But he did not lose his composure; he stood upright, stretched against the stone cold wall and breathed deeply. Jane Price entered the room and stopped abruptly. Looking around her she muttered to herself and strolled to the kitchen drawer. This was the moment he had waited for. He would get what he wanted. Staring at the bent figure in front of him he raised his gun and placed his finger on the trigger silently. No. His finger was stiff. Jane turned, not noticing him, and strode out of the kitchen.

His mind went blank with fear and then suddenly, faced with the action he was committing, his childhood flashed before him. Screaming. Screaming for his mother. Armed men struggled with a woman yelling at an ear-splitting volume. They were taking her away from her family, her life. He felt his father smothering him to try and prevent him from seeing the distress pictured on the woman’s face. His mother wept and stretched to her very limit to try and touch her young son. She couldn’t reach. The men yanked her away from the house dragging her feet on the frost bitten ground violently. He screamed, cried for help, but none came. She was gone, gone forever. All he had left was his father, the man who wouldn’t care for him. He was all on his own. The childhood he once had was gone.

By this time Jane Price had escaped death and moved from the kitchen. She was now fumbling around with some papers in the next room. The man now had woken from his violent day dreams and was filled with chaos. What would he do next? All thought of his job had gone, only his upsetting childhood remained in his mind. He was still stood in the same position, gun in his hands, stood upright against the wall.

He had to complete his job. He had been assigned it and had to succeed. He shook his head to try and remove his terrible thoughts from his mind and attempted to build confidence for what he was about to do. Jane wandered into the kitchen again looking in the cupboards below the sink. He stepped sideways from his position. Jane quickly looked up, she was confused, afraid. Frozen with fear she cowered in the corner of the kitchen, shielding her face with wrinkled hands. He raised his gun slowly, closed one eye to aim and lay his finger on the trigger. Bang. Jane lay on the floor clutching her head where crimson blood poured onto her face, her clothes and her hands, glistening from the light. All life left her; she rested on the floor a dead woman. Nothing more. He had done it.

Gun still raised the man stared into his victims eyes. He slowly lowered his gun and placed it into his inside pocket once again. One step. Two steps. Three steps. He stood over Jane gaping at her lifeless body and then saw a glimmering necklace laid upon her hand. Seeing this, he crouched down to pick up the object. A locket. He clicked open the catch of the silver piece of jewellery to see two images. His father. Him. The colourless body before him was his mother. The one person he’d been looking for his whole life. The one person who he could believe in and he’d killed her. His eyes ruptured with tears as he lay on the floor aside his dead mother. What did he have to live for now?

The man, covered in tears, reached slowly into his inner pocket. Another bullet. Another life to be taken away. Loading his gun once more he looked at his mother and softly stroked her crumpled face. Gazing in front of himself he lifted his gun to his head. The trigger was pulled. Crimson blood created a carpet of red. Slumped on the innocent kitchen floor were the bodies of Jane Price and Alan Price, together at last.