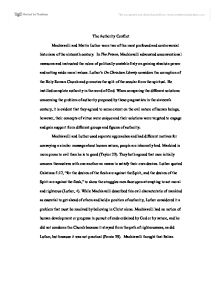 The Authority Conflict Machiavelli and Martin Luther were two of the most profound and controversial historians of the sixteenth century. In The Prince, Machiavelli advocated unconventional measures and instructed the rulers of politically unstable Italy on gaining absolute power and setting aside moral values. Luther's On Christian Liberty considers the corruption of the Holy Roman Church and promotes the split of the secular from the spiritual. He instilled complete authority in the word of God. When comparing the different solutions concerning the problem of authority proposed by these pragmatists in the sixteenth century, it is evident that they agreed to some extent on the evil nature of human beings; however, their concepts of virtue were unique and their solutions were targeted to engage and gain support from different groups and figures of authority. Machiavelli and Luther used separate approaches and had different motives for conveying a similar message about human nature; people are inherently bad. Mankind is more prone to evil than he is to good (Taylor 23). They both agreed that men initially concern themselves with one another as means to satisfy their own desires. Luther quoted Galatians 5:17, "for the desires of the flesh are against the Spirit, and the desires of the Spirit are against the flesh," to show the struggles men face upon attempting to act moral and righteous (Luther, 4). ...read more.

He illustrates his concept of virtue when he recommends that a ruler know how to suppress his human nature and assume the characteristics of a beast. "The lion is defenceless against traps and a fox is defenceless against wolves; therefore, [a prince] must be a fox in order to recognize traps, and a lion to frighten off wolves" (Machiavelli 56). He used symbolism of the fox and bear to represent deceptiveness and strength or brutality, respectively. In his view it is legitimate and necessary for a prince to deceive his adversaries and employ violence against them if the state will benefit. He referred to Alexander VI, a pope whom possessed Machiavelli's virtue, as an example showing the successfulness of being deceptive. "[Alexander's] deceptions always had the result he intended, because he was a past master in the art" (57). Though Machiavelli used ironic characteristics to illustrate his ideal of virtue, he did exclude from the definition anything that Christians would have considered morally wicked behavior. He wrote, "It cannot be called prowess to kill fellow citizens, to betray friends, to be treacherous, pitiless, irreligious (29). He does recommend to the ruler generally admirable things; however his conception of virtue is rooted in his appetite for power and the idea of getting power by any means. ...read more.

In On Christian Liberty, Luther prohibited the rebellion of citizens against the government under any circumstance. He said, "Christians should be subject to the governing authorities and be ready to do every good work...that in the liberty of the Spirit they shall by so doing serve others and the authorities themselves and obey their will freely and out of love" (Luther 58). The only exception to this rule was if the government interfered with religious matter, and then the subject could only disobey on right grounds, still submitting to the Word of God. Though these two contemporaries used distinctly different approaches to discuss the problem of conflicting authorities in 16th century Europe, they each impacted politics, religion, and thought on levels that have had lasting effects on society today. Machiavelli's principles of gaining power and authority can be applied in various fields of the modern world. Five hundred years after its introduction, the "Machiavellian" style of leadership, with its deceiving and dishonest connotation, is still used to get ahead in politics and business. Luther's notions sparked the Protestant Reformation, a testament to the impact of his ideas. The authority that he instilled in the Scripture and the morals and obedience that he promoted are responsible for the religious freedom, individual rights, and protection from central control that we enjoy today. ...read more.