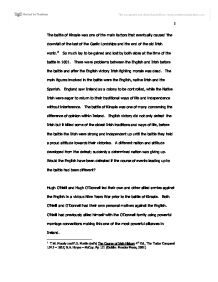 The battle of Kinsale was one of the main factors that eventually caused 'the downfall of the last of the Gaelic Lordships and the end of the old Irish world.'

The battle of Kinsale was one of the main factors that eventually caused 'the downfall of the last of the Gaelic Lordships and the end of the old Irish world.'1 So much lay to be gained and lost by both sides at the time of the battle in 1601. There were problems between the English and Irish before the battle and after the English victory Irish fighting morale was dead. The main figures involved in the battle were the English, native Irish and the Spanish. England saw Ireland as a colony to be controlled, while the Native Irish were eager to return to their traditional ways of life and independence without interference. The battle of Kinsale was one of many concerning the difference of opinion within Ireland. English victory did not only defeat the Irish but it killed some of the oldest Irish traditions and ways of life, before the battle the Irish were strong and independent up until the battle they held a proud attitude towards their victories. A different nation and attitude developed from the defeat; suddenly a determined nation was giving up. Would the English have been defeated if the course of events leading up to the battle had been different? Hugh O'Neill and Hugh O'Donnell led their own and other allied armies against the English in a vicious Nine Years War prior to the battle of Kinsale. ...read more.

O'Neill's army was now of substantial size and along with O'Donnell's army, victory was not difficult; the Irish had location to their advantage. The English attempted to move over bog land but with disastrous results. The English were defeated at the battle of Yellow Ford. This is one of the most successful battles achieved by the Gaelic Lords because the English suffered such a great loss, while the leader of the attack, Bagenal, was recalled to England. Victory helped to boost morale but things began to falter for the Irish, the English were recognising their mistakes and attempting to prevent them happening again. Finally after much correspondence the Spanish sent aid to the Irish. In 1601 3000 Spanish troops under the command of Don Juan de Aguila landed at Kinsale, the very south of the Island of Ireland. Phillip II had willingly sent troops to the aid of the Irish but had ignored pleas to land further north of the Island. It is not known exactly why they landed at Kinsale, but it is thought that they followed the advice of the Archbishop of Dublin5. At Kinsale they were warmly welcomed by the Irish, yet they were 250 miles away from their allies. The English immediately surrounded them effectively trapping them in Kinsale, thus preventing the armies to unite. ...read more.

He delivered his surrender at Mellifont on March 30th 1603. The battle of Kinsale was the end of the old Irish system. The Irish not only lost the battle but they lost their morale, and the definitive support of the Spanish. The English had defeated them in the battle and stood proud. When O'Neill surrendered to the English he was forced to give up his Gaelic ways and take on English laws, this is likely why he fled to Europe. A number of Lord Deputies had been insufficient in oppressing the 'wild Ulster men' yet Mountjoy was a different type of soldier. He planned to bring about 'a new kind of war which was to beat O'Neill at his own game.'7 After their defeat life was harsh for the Irish. Many did not want to be controlled by the English. They lost their morale and were suddenly deprived of familiar pride. The Nine Years War and battle of Kinsale wiped out the old Gaelic system, possibly wiping out a 'nation' as such. 1 T.W. Moody and F.X. Martin (ed's) The Course of Irish History 4th Ed., The Tudor Conquest 1543 - 1603, G.A. Hayes - McCoy. Pp 151 (Dublin: Mercier Press, 2001) 2 Stephen Gwyn The History of Ireland (Dublin: MacMillian & Co. 1924) pp 231 3 Stephen Gwyn The History of Ireland (Dublin: MacMillian & Co. 1924) 4 http://www.irishstampsonline.com/SG%202001%20Battle%20of%20Kinsale.htm 5 http://www.finnvalley.ie/history/odonnells/battleofkinsale.html 6 http://www.bbc.co.uk/history/timelines/ni/battle_kinsale.shtml 31/10/02 7 Edmund Curtis, A History of Ireland (London: Routledge: London & New York) 1988, pp 215 1 ...read more.