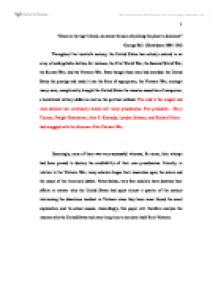 The battles of the United States and the consequences of these.

"Once on the tiger's back, we cannot be sure of picking the place to dismount" -George Ball- (Donaldson 1996: 106) Throughout the twentieth century, the United States has actively entered in an array of unforgettable battles, for instance, the First World War, the Second World War, the Korean War, and the Vietnam War. Even though these wars had awarded the United States the prestige and made it into the fame of superpower, the Vietnam War, amongst many wars, exceptionally brought the United States the massive casualties of manpower, a humiliated military defeat as well as the political setback. The road to the longest and most decisive war continually lasted over many presidencies. Five presidents - Harry Truman, Dwight Eisenhower, John F. Kennedy, Lyndon Johnson, and Richard Nixon - had struggled with the dilemma of the Vietnam War. Seemingly, none of them was very successful whereas, for some, their attempt had been proved to destroy the creditability of their own presidencies. Literally, in relation to the Vietnam War, many scholars began their researches upon the nature and the cause of the American defeat. Nevertheless, very few scholars have devoted their efforts to answer why the United States had spent almost a quarter of the century intervening the disastrous incident in Vietnam since they have never found the exact explanation and its actual causes. Accordingly, this paper will therefore analyze the reasons why the United States took very long time to extricate itself from Vietnam. The long lasting adversarial relationship with the Soviet Union is considered as one of the most important reasons contributing to the American longest involvement in warfare. The Vietnam War is not merely a civil war fought between the North Vietnamese and the South Vietnamese, it turns out to be a proxy war between the United States and its main rival, the Soviet Union as well. Hess argues that: In the post-World War II period, that historic vision of promoting liberty merged with a strong anticommunist ideology. ...read more.

The United States, at this point, started to feel the difficulty and the pressure of saving Asia for the free world. Its solutions were hardly in sight unless a new foreign policy has been implemented. Although the United States always denies the importance of economics as a major cause of US involvement in Vietnam, the importance of economic in Southeast Asia plays a considerable role in preventing the United States to withdraw itself from them Vietnam War. Williams observes: "And so, quite naturally, once again to war...to secure the necessary access to the world marketplace" -William A. Williams, The Tragedy of American Diplomacy Most economic explanations of US involvement in Vietnam War can be put under "the umbrella of what may be called the theory of neocolonialism" (Kimball 1990: 19). Many scholars agreed on the fact that neocolonialism guided the American policymakers to a policy of opening doors abroad to investments, raw materials, and markets that suited American interests. The Americans are "fighting the war to defend an economic empire-fighting to control the markets and the resources of a wealthy corner of the globe" (Kimball 1990: 272). From this view, it can be concluded that the United States is fighting the war to defend its own economic interests. As we know, Southeast Asia was "the world's largest producer of natural rubber and was an important source of oil, tin, tungsten, and other strategic commodities. North Vietnam is rich in coal, and South Vietnam has large oil reserves" (Kimball 1990: 156). Despite the fact that the economic of Vietnam was not impressive to the United States, the commodity values in Southeast Asia was vital to the United States interests. If these important raw materials and other resources suddenly change hands to the Soviet Union, Communism would be enormously strengthened at the expense of the West (Herring 1979: 11). Moreover, the impact of the loss of Vietnam on Japan, America's major Far Eastern ally, could be disastrous. ...read more.

The long American effort in the Vietnam War can be seen as the exercise of each President in so as to avoid being the first President to lose a war in American history. The longest American commitment in the war ended as a disguised surrender and left its scars on the institutions and future direction of American foreign policy. The United States intensively suffered from its enormous-but-waste investment in Vietnam in almost every aspect. If the United States had withdrawn itself from Vietnam earlier, it would not have had to suffer from severe Vietnam syndrome. The possible causes which obstructed America's extrication from Vietnam are as following: the long rivalry ongoing conflict between the United States and the Soviet Union; the importance of the global strategy of containment and the essence of domino theory; the impact of the loss of China; the growing of economic interests in Southeast Asia; the significance of Southeast Asia strategic position; and the role of the President and the pressures of domestic politics. Many scholars have questioned "if the United States had use its military power more judiciously, it could have succeeded in attaining its goal in Indochina at a reasonable price and in a timely manner" (Walton 2002: 152-153). After all, the United Stated had perceived that stepping into one's stake was quite an easy task for the superpower with all sorts, but disengaging without any great losses would be the most impossible. RICHARD NIXON, April 1964 The first issue is what the goal of the United States should be. I believe that the goal can be nothing less than victory. RICHARD NIXON, February 1965 What is involved here is, in effect, to let the Red Chinese know in Vietnam as we, in effect, let Khrushchev know in the confrontation in Cuba that the United States will not stand by and allow any power, however great, take over another country by aggression. RICHARD NIXON, May 1966 A retreat by the United States from Vietnam would be a Communist victory, a victory of massive proportions and would lead to World War III. 1 ...read more.