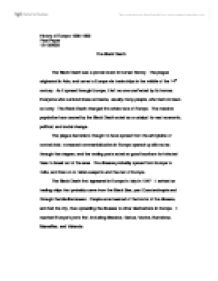 History of Europe 1000-1500 Final Paper 12/10/2003 The Black Death The Black Death was a pivotal event in human history. The plague originated in Asia, and came to Europe via trade ships in the middle of the 14th century. As it spread through Europe, it left no one unaffected by its horrors. Everyone who survived knew someone, usually many people, who had not been so lucky. The Black Death changed the whole face of Europe. The massive population loss caused by the Black Death acted as a catalyst for vast economic, political, and social change. The plague bacteria is thought to have spread from the arid plains of central Asia. Increased commercialization in Europe opened up silk routes through the steppes, and the trading posts acted as good locations for infected fleas to break out of the area. The disease probably spread from Europe to India, and then on to Italian seaports and the rest of Europe. ...read more.

The whole process, from first symptoms of fever and aches, to death, lasts only three or four days. The swiftness of the disease, the terrible pain, the grotesque appearance of the victims, all made the plague especially terrifying. There were several different strains that made up the plague of the Black Death. The most commonly known, the bubonic, could only be spread from a mixing of body fluids, and was sometimes survivable. It was spread primarily by rat fleas that drank the blood of an infested host, and then while drinking the blood of another, some infected blood was inevitably regurgitated. The pneumonic form could be spread through the air, and was therefore more common and much harder to control. It was also more deadly. Almost no one who contracted the pneumonic form survived. Cities were hit hard by the plague. Financial business was disrupted as debtors died and their creditors found themselves without recourse. Not only had the creditor died, his whole family had died with him and many of his kinsmen. ...read more.

One of the groups that suffered the most was the Christian church. It lost prestige, spiritual authority, and leadership over the people. How? The church promised cures, treatment, and an explanation for the plague. They said it was God's will, but the reason for this awful punishment was unknown. People wanted answers, but the priests and bishops didn't have any. The clergy abandoned their Christian duties and fled. People prayed to God and begged for forgiveness. After the plague, ended angry and frustrated villagers started to revolt against the church. The survivors were also enraged at doctors, who didn't cure patients, but said they could. The Black Death was a turning point in history. After its arrival from Asia, the Black Death caused, in the span of two years, one out of every three people to die. Nothing like that has happened before or since. The numbers of population loss alone were significant in political and economic terms. During the Black Death and the immediate aftermath, Europe underwent political, social, and economic change, and emerged completely changed. ...read more.