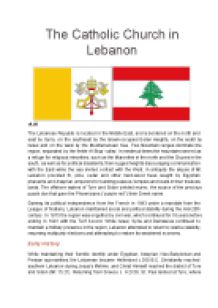 The Catholic Church in Lebanon - A.W.

﻿The Catholic Church in Lebanon ________________ -A.W. The Lebanese Republic is located in the Middle East, and is bordered on the north and east by Syria, on the southeast by the Israeli-occupied Golan Heights, on the south by Israel and on the west by the Mediterranean Sea. Two Mountain ranges dominate the region, separated by the fertile Al Biqa? valley. In medieval times the mountains served as a refuge for religious minorities, such as the Maronites in the north and the Druzes in the south, as well as for political dissidents, their rugged heights discouraging communication with the East while the sea invited contact with the West. In antiquity the slopes of Mt. Lebanon provided fir, pine, cedar and other hard-wood trees sought by Egyptian pharaohs and Assyrian emperors for building palaces, temples and boats in their treeless lands. The offshore waters of Tyre and Sidon yielded murex, the source of the precious purple dye that gave the Phoenicians (??purple red??) their Greek name. Gaining its political independence from the French in 1943 under a mandate from the League of Nations, Lebanon maintained social and political stability during the mid-20th century. In 1975 the region was engulfed by civil war, which continued for 16 years before ending in 1991 with the Ta?if Accord. While Israel, Syria and Damascus continued to maintain a military presence in the region, Lebanon attempted to return to relative stability, resuming multiparty elections and attempting to restore its weakened economy. ...read more.

World War I ended this privileged status, and World War II ended the French mandate. By the early 20th century a number of Eastern Patriarchs, including the Maronite, Syrian Catholic, Armenian Catholic and Armenian Orthodox, had their principal residences in Lebanon. In 1943 the Lebanese Republic was born, and for three decades thereafter peace and prosperity characterized the region. Christians and Muslims shared equal political power and ecumenical dialogue between all faiths continued to take place. Universities and seminaries, long the center for Christian intellectual activity, trained many of the clergy, not only for Lebanon but for other countries in the Middle East as well. The University Of St. Joseph Of Beruit, administered by the Jesuits and the University of the Holy Spirit of Kalik, administered by the Order of Lebanese monks, both with pontifical faculties, continued to flourish. Publishing houses in Lebanon produced liturgical texts, catechetical resources and works of theology. War in the Middle East While Lebanon?s stable political situation and strategic location aided its economic growth and gained it influence within the Middle East, problems soon surfaced. Over time the government fell into the hands of conservative Christians, leaving the substantial Muslim population without political representation and influenced by the growing tide of Islamic fundamentalism. Balancing the interests of so many religious communities and cultures was bound to suffer serious strain under the tensions prevalent in the Middle East. ...read more.

Four years later Beirut hosted a meeting of Middle East and North African Church leaders as they addressed the future of the Catholic Church in an increasingly fundamentalist Muslim world. Into the 21st Century Despite the devastation of the late 20th century, Lebanon remained the one country in the Middle East where Islam and Christianity were able to encounter each other as equals. Minor religious groups included Protestants, Syrians (Surya¯n, Orthodox and Catholic), Nusayri and Jews, all of which were encouraged by the government to participate in interfaith dialogue. Greek Melkite Catholics, an Orthodox group that split with Rome in the 18th century, was among the nine partriarchal sects active in Lebanon by 2000. In addition, followers of five Muslim sects and 11 Christian denominations made their home in the region. By 2000 there were over 990 parishes serving various Catholic denominations in Lebanon, and 740 diocesan and 622 religious priests tended them. The Church operated over 300 trilingual (Arabic, French, and English) primary and secondary schools for the benefit of the Lebanese community, and their students accounted for 30 percent of the nation’s students. Almost 3,000 sisters worked among the religiously diverse Lebanese community, serving the educational and humanitarian needs of all people, no matter what their faith. Important Note: This work is owed to ‘The New Catholic Encyclopedia 2nd edition, vol. 8’; published by the ‘Gale Group’. Please do not forget to acknowledge this information if you are to use this work for any of your writings. Thank You. -A.W. ...read more.