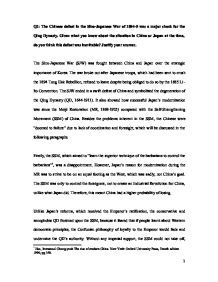 The Chinese defeat in the Sino-Japanese War of 1894-5 was a major shock for the Qing Dynasty. Given what you know about the situation in China or Japan at the time, do you think this defeat was inevitable? Justify your answer.

Q2: The Chinese defeat in the Sino-Japanese War of 1894-5 was a major shock for the Qing Dynasty. Given what you know about the situation in China or Japan at the time, do you think this defeat was inevitable? Justify your answer. The Sino-Japanese War (SJW) was fought between China and Japan over the strategic importance of Korea. The war broke out after Japanese troops, which had been sent to crush the 1894 Tong Hak Rebellion, refused to leave despite being obliged to do so by the 1885 Li-Ito Convention. The SJW ended in a swift defeat of China and symbolized the degeneration of the Qing Dynasty (QD, 1644-1911). It also showed how successful Japan's modernization was since the Meiji Restoration (MR, 1868-1925) compared with the Self-Strengthening Movement (SSM) of China. Besides the problems inherent in the SSM, the Chinese were "doomed to failure" due to lack of coordination and foresight, which will be discussed in the following paragraphs. Firstly, the SSM, which aimed to "learn the superior technique of the barbarians to control the barbarians"1, was a disappointment. However, Japan's reason for modernization during the MR was to strive to be on an equal footing as the West, which was sadly, not China's goal. The SSM was only to control the foreigners, not to create an Industrial Revolution for China, unlike what Japan did. ...read more.

The Chinese officials despised the merchants and tried to remove them from posts in the industries. This was unwise as the merchants were rich and were most able to provide the capital needed for the SSM. The government, instead of trying to get rid of them, should actually try to attract them into these industries. Moreover, instead of protecting its budding industry, the government taxed the most dynamic enterprises heavily. As a result of this heavy taxation, after a long period of initial success, most of these new enterprises would lose its economic competitiveness. From this, we can thus see that undergoing industrialization did not help China very much. In contrast, Japan sought to industrialize herself to ensure a sound economic base. The government became a large-scale patron of new businesses, supporting them financially. Heavy industries like steel and iron became strategic, contributing to the building up for her own navy. The excess was exported for revenue. Industrialization became a huge success for it also contributed to the success of the other areas of modernization like military. Also, the revenue brought about by exporting her own goods gave the government a sound financial base and increased the people's confidence in it. The SSM also failed due to a lack of capital. ...read more.

Li did not have the authority to do things according to his will and he could not mobilize support from the ships and troops outside his Peiyang command and Huai army. In contrast to China's lack of a strong, central authority, Japan had stable political leadership after the Meiji Restoration by 1894. She had established a modern constitutional structure that enabled the oligarchy to maintain a generally autocratic control over policy. This oligarchy formed a highly centralized bureaucracy which provided Japan with the government capable of marshalling its resources at any time. In conclusion, the failure of the SSM and the overwhelming success of Japan's modernization were crucial in China's defeat, because it showed the disparity between the Peiyang Fleet as compared to Japan's more advanced army and navy. It was inevitable that the Chinese lost the SJW because her fleet was incompetent and unprepared for battle. National unity was lacked of in Chinese society. However, in the Japanese society, everything was seen as a national effort. Without ample support, a defeat would be rather unavoidable. Lack of central authority aggravated China's already-losing battle. Li could not mobilize support or do things according to his will. By the end of the SJW, the fact that China lacked essential modernization efforts became clear. She was even unable to defeat such a smaller nation as compared to herself. China was thrown into an "era of humiliation" as she was sliced off and partitioned to the different foreign powers. ...read more.