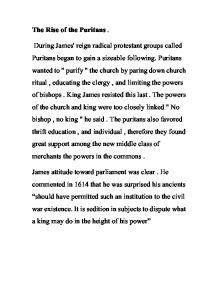 The Rise of the Puritans . During James' reign radical protestant groups called Puritans began to gain a sizeable following. Puritans wanted to " purify " the church by paring down church ritual , educating the clergy , and limiting the powers of bishops . King James resisted this last . The powers of the church and king were too closely linked " No bishop , no king " he said . The puritans also favored thrift education , and individual , therefore they found great support among the new middle class of merchants the powers in the commons . James attitude toward parliament was clear . He commented in 1614 that he was surprised his ancients "should have permitted such an institution to the civil war existence. It is sedition in subjects to dispute what a king may do in the height of his power" PURITANISM Puritanism is the strife for a worship purified from all taint of popery and it is the aversion from gaiety and the passionate love of civic freedom. ...read more.

In 1660, the Stuart dynasty returned to the throne. **************************************** John Milton: (Puritan) - An Example of Literature He was born on 9th December 1608. He wrote seven or eight poems in Latin while in school. Concerned with the puritan cause, he was against Episcopacy or government by Bishops. At that time of the Civil War, John wrote pamphlets defending the execution of Charles 1 by the victorious parliamentarians. In 1646, he published a collection of poems, but politics was still his main occupation. Besides the pamphlets, he became Secretary of Foreign Tongue under the new Commonwealth. He always felt that the commonwealth failed to reach its full potential and disapproval of Oliver Cromwell's dictatorial ways after declaring himself Lord Protector of the Commonwealth. Still, he worked away loyally until he lost his eyesight in 1651. After the death of Charles 1, Milton Published The Tenure of Kings and Magistrates 1649 supporting the view that the people had the right to depose and punish tyrants. ...read more.

He favored religious toleration largely because of his leaning towards Roman Catholicism. The Main Figure of Restoration Comedy: William Congreve: William Congreve (January 24, 1670 - January 19, 1729) was an English playwright and poet. William Congreve wrote some of the most popular English plays of the Restoration period of the late 17th century. By the age of thirty, he had written four comedies, including Love for Love (premiered April 30, 1695) and The Way of the World (premiered 1700), and one tragedy, The Mourning Bride (1697) - The Way of the World is a play written by British playwright William Congreve. It is widely regarded as being one of the best Restoration comedies written and is still performed to this day. - The Double-Dealer, a comedy by William Congreve dealing with angry lovers. - Love for Love: a Comedy by William Congreve, funnier, interesting characterized by its foolish characters and clever speech Unfortunately, his career ended almost as soon as it began. After writing five plays from his first in 1693 until 1700, he produced no more as public tastes turned against the sort of high-brow sexual comedy of manners in which he specialized. ...read more.