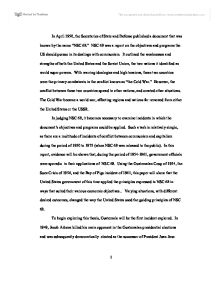 In April 1950, the Secretaries of State and Defense published a document that was known by the name "NSC 68." NSC 68 was a report on the objectives and programs the US should pursue in its dealings with communism. It outlined the weaknesses and strengths of both the United States and the Soviet Union, the two nations it identified as world super powers. With warring ideologies and high tensions, these two countries were the primary combatants in the conflict known as "the Cold War." However, the conflict between these two countries spread to other nations, and created other situations. The Cold War became a world war, affecting regions and nations far removed from either the United States or the USSR. In judging NSC 68, it becomes necessary to examine incidents in which the document's objectives and programs could be applied. Such a task is relatively simple, as there are a multitude of incidents of conflict between communism and capitalism during the period of 1950 to 1975 (when NSC 68 was released to the public). In this report, evidence will be shown that, during the period of 1954-1961, government officials were sporadic in their applications of NSC 68. Using the Guatemalan Coup of 1954, the Suez Crisis of 1956, and the Bay of Pigs incident of 1961, this paper will show that the United States government of this time applied the principles expressed in NSC 68 in ways that suited their various economic objectives.. Varying situations, with different desired outcomes, changed the way the United States used the guiding principles of NSC 68. To begin exploring this thesis, Guatemala will be the first incident explored. In 1949, Jacob Arbenz killed his main opponent in the Guatemalan presidential elections and was subsequently democratically elected as the successor of President Juan Jose Arevalo. ...read more.

. The US continued with this policy, even after Israel invaded Egypt in October, 1956, with the backing and support of France and Britain. They asked for the US's support in containing this communist threat, but the US would not support this military action. This was not only because of the fear of alienating the main source of the US oil supply. The US could not support the actions of its allies because, if the US showed support, it would be supporting actions which it had condemned the Soviet Union for practicing. That is, if the US supported France and Britain, it would be supporting colonization, which was a system it used to show the evils of communism. To remove itself from this sticky situation, the United States turned to the United Nations to solve the problem of the Suez Canal, first through the Security Council and then through the General Assembly. With the United States against their actions, and Russia threatening rocket attacks if they did not withdraw, the French-British-Israeli alliance had no choice but to remove itself from Egypt. This effectively ended the role of the British and French in the Middle East, and allowed the Soviets to fill in some of the vacuum of power. In this incident, the government followed NSC 68 very closely. This document was strongly against the use of force or conflict, as the writers of the report feared the military strength of the Soviet Union. By averting war and using the United Nations to solve the conflict, the United States was following NSC 68. Also, in supporting the nationalization of the Suez Canal by the Egyptian government, the United States is sticking to the NC 68 objective of allowing countries free will. ...read more.

In many ways, it did. The invasion was the result of a threat to the United States and its economic interests, which were two areas that NSC 68 instructed the government to protect. In addition, war was avoided at the cost of the lives of the invaders. Instead of risking a world war, the US chose to help nationals rather than stage a full-on attack itself. It also tried other tactics, to try and achieve its aims. However, the trade embargoes and radio and other propaganda techniques failed. Once again, however, the US was guilty of not allowing other nations in its hemisphere from practicing self-determination. However, in this case, it was more justified, as the government under attack was not elected in the democratic method the US advocated. Also, unlike before, Cuba did represent a real threat to the US's safety. Located merely ninety miles south of Florida, Cuba could have served as a launch pad for a communist attack on America. In fact, in 1962, the US discovered that Cuba was housing many ballistic missiles which had been placed on the island by the Soviets. The threat here was very real, and the US still followed its convictions of avoiding war. NSC 68 is a set of suggestions of how the US should respond to communist threats. It advocates free will, economic actions to bring communism down, and an avoidance of war. The US has used and applied NSC 68 in a manner of incidents over the years. However, the US applied the tenants of this document as it saw fit in each situation. If following the ideas of the document would not have brought about the desired results, then the document was ignored. IN terms of economic desired outcomes, this is the most clear. The US used NSC 68 when it suited its purposes. ...read more.