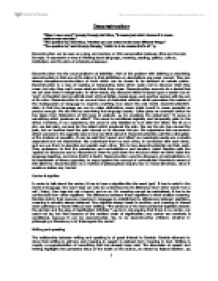 The debate between structuralism and deconstruction.

Deconstruction "When I use a word," Humpty Dumpty told Alice, "it means just what I choose it to mean-neither more nor less." "The question is," said Alice, "whether you can make words mean different things." "The question is," said Humpty Dumpty, "which is to be master-that's all." (1) Deconstruction can be seen as a long commentary on this conversation between Alice and Humpty Dumpty. It represents a way of thinking about language, meaning, reading, politics, culture, institutions and the aims of scholarly endeavour. Deconstruction has the usual problems of definition. Part of the problem with defining or describing deconstruction is that one of its claims is that definitions or descriptions are never correct. They are always deceptions-constructions of truth which can be shown to be deficient at certain points. Deconstruction is a way of reading or interpreting texts which seeks not to discover what they mean, but why they can't mean what we think they mean. Deconstruction amounts to a denial that we can ever have a metaphysics. In other words, any discourse which is based upon a system (or an 'arch', in Derrida's terms) will fall short of its ambition, break down, and another system will rise out of its ruins. Deconstruction is an unusual form of rhetorical criticism which persuades the reader of the inadequacies of language to express anything true about the real world. ...read more.

A. Where is meaning? 1. Derrida opposes the idea that "meanings can be fully present to individuals in their minds, without slippage of any kind of occurring." 2. He thinks that "meaning is neither before nor after the act." 3. "Meaning is not present in a text." It depends on "the individual reader." Because their different life experience and reading experience, each reader will have their own meanings when they read a text" (133). A. What does Derrida really fight against? 1. "Derrida wants a free play of meaning; this suggests that it is not just logocentricity that Derrida is setting himself against, but Western culture's commitment to rationality and liner thought." 2. "Derrida's argument is that structuralists are imposing a form on textual material, and that such a practice puts limits on human creativity" (134). The key difference between deconstruction and structuralism is that the latter posits the stability of signs and language systems; and although it rejects attempts to justify systems of thought on referential grounds, i.e., attempts to find unshakable foundations for our beliefs by matching them up to the real world. 1. Signs only mean by difference. You have heard this before from deSausssure. He worked through the concept of the sign, he argued that relationship between signifier and signified is arbitrary, and showed that signs only mean in relation to each other (remember "muton" and "sheep"?) ...read more.

All texts are constituted by difference from other texts (therefore similarity to them). Any text includes that which it excludes, and exists in its differences from/filiations with other texts. Opposites are already united; they cannot be opposites otherwise. Nor can they be a unity, and be themselves. They are the alternating imprint of one another. There is no nihilism without logocentrism, no logocentrism without nihilism, no presence without absence, no absence without presence, and so forth. deconstructive reading can be applied to any text. It is a theory of reading, not a theory of literature. Reading these texts in the deconstructive mode is, however, not a matter of 'decoding the message'; it is a matter of entering into the thoughtful play of contradiction, multiple reference, and the ceaseless questioning of conclusions and responses. The technique of deconstruction - meaning defined relationally/oppositionally - of two oppositional terms one is dominant e.g white is dominant in relation to black - in texts there is a core and a periphery) also defined oppositionally - deconstruction reverses the hierarchy of oppositions within the text - most significantly core and periphery - deconstruction demonstrates the concealed metaphorical status of denotational meaning -deconstruction demonstrates how texts undermine their own claims to truth Some Derridean Propositions There is no Transcendental Signified Western Culture fixated upon the notion of 'presence' There is nothing outside the text. Social reality is discursively constructed The concept 'differance' demonstrates performatively the infinite deferral of meaning - it requires contextualisation to be recognized. Meaning is fundamentally elusive. 1 ...read more.