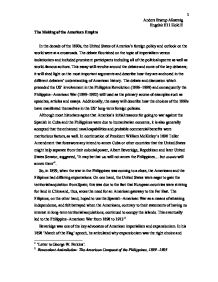 The decade of the 1890s marked a distinct reorientation in the United States Government's outlook on the world. Discuss the major impulses and events that marked this turn toward 'American empire', and analyse the public debates that it engendered. Who we

The Making of the American Empire In the decade of the 1890s, the United States of America's foreign policy and outlook on the world were at a crossroads. The debate flourished on the topic of imperialism versus isolationism and included prominent participants including all of the political spectre as well as world-famous authors. This essay will revolve around the debate and some of the key debaters; it will shed light on the most important arguments and describe how they are anchored in the different debaters' understanding of American history. The debate and discussion which preceded the US' involvement in the Philippine Revolution (1896-1898) and consequently the Philippine-American War (1899-1902) will used as the primary source of examples such as speeches, articles and essays. Additionally, the essay will describe how the choices of the 1890s have manifested themselves in the US' long-term foreign policies. Although most historians agree that America's initial reasons for going to war against the Spanish in Cuba and the Philippines were due to humanitarian concerns, it is also generally accepted that the enhanced naval capabilities and probable commercial benefits were meritorious factors, as well. In continuation of President William McKinley's 1898 Teller Amendment that foreswore any intend to annex Cuba or other countries that the United States might help separate from their colonial power, Albert Beveridge, Republican and later United States Senator, suggested, 'It may be that we will not annex the Philippines... ...read more.

Contrary to this logic, Beveridge stated that '[America] cannot retreat from any soil where Providence has unfurled our banner; it is ours to save that soil for liberty and civilization',9 and in a speech to the Senate after his return from a visit in the Philippines, he states, 'The Philippines are ours forever!'10 Alas, the terms liberty and civilisation still propose a contradiction in 'March of the Flag'. In his first speech after being elected to Senate, and after the before mentioned visit to the battlefields of the Philippines, Beveridge proposed a new definition of liberty and, thereby, achieved a resolution for his liberty-paradox: For what is liberty? The liberty of a people means law. First of all, it is a common rule of action, applying equally to all within its limits. Liberty means protection of property and life without price, free speech without intimidation, justice without purchase or delay, government without favor[sic]or favorites[sic].11 Contrary to the traditional perception of liberty, namely that of both personal freedom and political sovereignty, Beveridge here described it as protection under the rule of law. Thereby, he ensured that his initial postulate, that American expansionism was created out of liberty and civilisation concerns, avoided any paradox it inevitably would have reached. Contrary to the American imperialists were the anti-imperialists. In 1898 the anti-imperialists sought to gather in order to strengthen their message and voice. ...read more.

. . It should, it seems to me, be our pleasure and duty to make those people free, and let them deal with their own domestic questions in their own way. And so I am an anti-imperialist. I am opposed to having the eagle put its talons on any other land.16 So, Twain was not actually against the US' initial intervention in Philippines - or Cuba for that matter. He characterised the war in Cuba against Spain as the 'worthiest war ever'17. He opposes the US' quest to rule and subjugate a country, so it can be argued that Twain was never an imperialist, he was an interventionist. Twain was of the opinion that the American conduct in the Philippines did not resemble the behaviour of a noble and grand nation. In fact, in his 1901 essay 'To the Person Sitting in Darkness' he describes how the US, in his opinion, has behaved like pirates and without honour: True, we have crushed a deceived and confiding people... who trusted us... we have robbed a trusting friend... we have invited clean young men to shoulder a discredited musket and do bandits' work under a flag which bandits have been accustomed to fear... we have debauched America's honor... And as for a flag for the Philippine Province... we can have just our usual flag, with the white stripes painted black and the stars replaced by the skull and cross-bones.18 Twain uses strong language to emphasise and concretise his arguments. ...read more.